The 12th Annual Mystic Music Sufi Festival: The Mysticism of Sufis in the World of Today 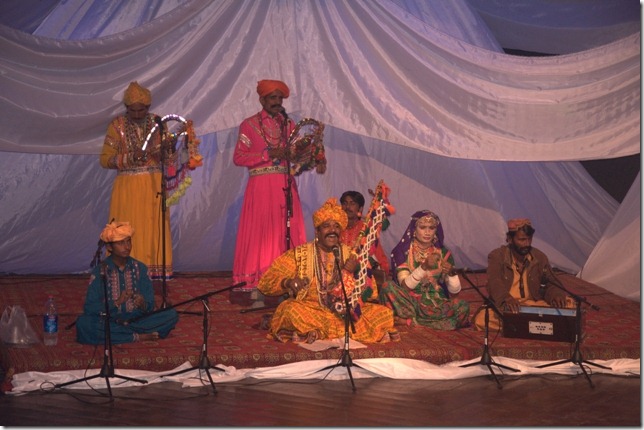 Sufi poetry has been the voice of the free spirited individual in every epoch. It is through the song and dance, and the infinite wisdom it holds of the great mystics of our land that we have been able to transcend the shallow visions of our own prejudiced society, and of all those who look down upon us as the people. The supreme love of peace behind the thought of the Sufi has, for a long time, been the true sword and shield of the Muslims. Today, there is a crying need for our entire nation to recall their words. We need to learn again from the ageless insight of the mystic thought; from the colossal wisdom of the Sufi and his baffling foresight. We desperately need to enlighten our own selves, uphold the banner of peace and step forward in this hardest, most hostile of times as the brave generation of today that we are. We firmly believe that Sufi poetry can bind us together as a nation, in love, harmony, and compassion and make way for the much needed peace, while making us content with our own existence and helping us understand the existence of others around us. 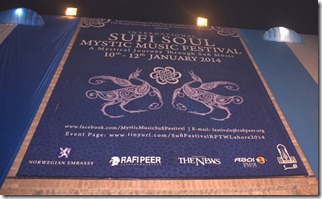 In collaboration with the Alhambra Arts Council and The Royal Norwegian Embassy, Rafi Peer Theatre Workshop organized the ceremonial 12th annual Mystic Music Sufi Festival: a three days event featuring Sufi Qawwaals (singers) and eastern classical musicians form all over the Pakistan, which commenced on the 10th January and lasted till January 12th, 2014. Much like every year, since 2000, the Mystic Music Sufi Festival carried with it another solemn stream of enchanting performances from each corner of Pakistan reflecting in itâ€™s true essence, the ethos of this mighty land of ours. The Sufi poetry showcased in the event that accompanied by the rich, energetic songs, in the length of itâ€™s cultural diversity, melted the hearts of each breathing member in the audience sitting in the Hall number 2 of the Alhambra Arts Council Mall Road. Rafi Peer Theatre Workshop has always been the deliverer of purposeful, quality entertainment at the culture hub of Pakistan, Lahore. RPTW has always strived to bring to us, inspiring acts from the uncharted depths of this nation. Having been a part of the audience, I can openly proclaim their success as consistent promoters of art and culture of our country.

The total number of performers exceeded two hundred and thus, to accommodate each act properly, the event was split into three days. The versatility of the performers in their delivery of the Sufiana Kalam (Mystic Poetry), spellbound the audience into the age-old mystic trance. One could feel the energy pouring out of every pore of their skin as the singers sang and the musicianâ€™s played upon the stage lit bright with colors. All of the acts left the audience mesmerized and longing for more, the prominent likes of which included: the multilingual Krishan Lal Bheel and his group mates dressed in traditional Cholistani attire, the energetic Bashir Lohar from Chiniot, Zarsanga: the internationally recognized queen of Pashto folk, Ayyaz Ahmed Nizami from Karachi, Mehboob Mian Miri Qawal group, Bazm-e-Liqa, the charismatic Sufi youth group from Gilgit Baltistan, three of Nusrat Fateh Ali Khanâ€™s disciples Sher Miandad, Mehboob Farid from Pak Pattan and Badar Ali Khan from Jalandhar, the prodigal son of the legendary Santoo Khan Qawwal, Shehzad Santoo, Shah Jo Raag: the captivating quintet from Sindh, the Balochi Maestro: Nawab Khan, Imran Aziz, the son of the great Aziz Mian, the dynamic duo of Wahdat and Husnain Rameez, the very young and talented Sanam Marvi, Arieb Azhar with his delightful blend of western and eastern folk, the national treasure Sain Zahoor, Akhtar Chinaar Zahri, Shaukat Dholia, Papu Sain Dholia, Goonga Sain Dholia and Mithu Sain Dholia. This grand festival brought together a massive crowd, ranging from tender-aged youngsters to senior citizens and everyone in between.

Krishan Lal Bheel and his group hail from Cholistan. He plays the Ek Tara (the traditional one-stringed instrument of the Sub-Continent) and is remarkably fluent in many languages including Hindi, Urdu, Sindhi, Saraiki, Cholistani, Rajhistani and his local language, Marvai. As unbelievable as it may seem, he can sing in all of these languages really well but whenever he plays the Ek Tara and sings in Marvai, the air around him gets filled with pure magic. The whole group dresses in their traditional costumes on stage, including Krishan Lal himself. He generates a marvel for the eyes through each and every element of his performance which, in addition to singing, includes dance, fire tricks, balancing feats and the classic whirling dervish.Â His group included five musicians – one of them whom sang one piece out of the three they performed – and two female exotic dancers who danced to the exquisite beat (Taal) of their song. The dancers also took the liberty of performing for us a very dangerous set of stunts such as juggling of blazing torches of fire, fire breathing and a balancing feat in which one of the dancer balanced a pot on her head, which contained a flame-lit stick, while she danced to the song. Absolutely mesmerizing the whole ambiance of Krishan Lalâ€™s performance turned out to be. 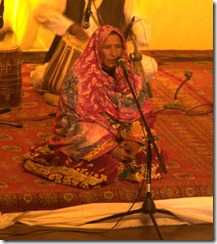 The modest and pure Zarsanga comes from a gypsy family of the Province of Khyber Pakhtunkhuwa. She is popularly known as the Malika-e-Pashto, Lok Virsa or The Queen of Pashto folk among the entire world and her solar voice does absolute justice to her title. That voice has been, very imaginatively by a French gypsy musician, called: â€œthe voice of the Pashto mountainsâ€. Indeed, it did echo through the hall chilling the entire audience to the bones. She sings Pashto folk songs and, has to her credit, many other popular original tunes. Zarsanga is one of the most internationally exposed folk artists of Pakistan. Her radio exposure also exceeds that of many, many other folk performers. She tours with her band excessively and has been awarded the prestigious Presedents Medal for pride of performance.

The theme of the song that Zarsanga sings focuses on the longing for oneâ€™s lover, who has either gone on an adventure or on a battle and she, through the sheer brilliance of her vocal chords, becomes the anxiousness of the woman that sits waiting impatiently for her lover to return. Pathans, the men of the North, have always been the warriors of this land and, whenever they set out on a skirmish, many a woman await their return home, victorious and unharmed. Zarsanga’s song embodies the intensity of the voice of the good warriorâ€™s wife that longs for her man to return and begs the Lord for her to feel their holy union once again.

Pakistan Onyx Handicrafts: A Unique Blend of Tradition and Culture