If you are or were a student of Karachi University, in theÂ past few years,Â you must have noticed a guy on a wheel chair selling stationary near Arts Lobby. A polio victim whose appearance is ordinary but heart is kind. Who speaks as if a genius is talking, and who, with all the disabilities, knows how to hold his head up high without fear and futility. Ali Hassan, 33 years old, is so much now than a guy on a wheel chair; he is now an honorable student in the world of Mass Communication.

It all started when Hassan was two years old. His legsÂ as he suffered from polio, and so he lost his father, a government employee, who earned his livingÂ by putting his blood and sweat for the future of Hassan and his family. But unfortunately, life was not kind as it took his fatherâ€™s life in 1998. The family tried to continue their lives like normal people but after a short time Hassanâ€™s mother was diagnosed with Hepatitis C. To meet all the expenses of her treatment, Hassan sold every valuable property they had to save his mother but all went in vain, and she left him mourning in 2003. By then, the only person Hassan could rely on was his aunt who lives in Karachi University Campus. 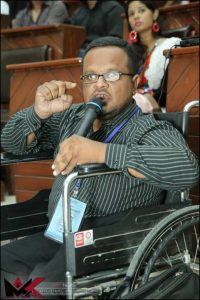 After all the tragic moments he endured, Hassan with his little savings of 600 rupees only, bought different mobile cards and begun to sale them within the campus. Soon, he became friendly with students and they adored him back. In 2006, he completed his Matriculation, but since he had no money or proper job that could bear the weight of his educational expenses; he began to invest more on the little business he ran. It was 2011 when finally he gathered enough money to get himself private admission in Intermediate.

Hassanâ€™s aims were high, and when there is a will thereâ€™s always a way. The business he started with 600 Rupees grew stronger and it was only a matter of timeÂ when he started a proper stationary stall, where he sales mobile SD cards, mobile cards, files, pencils, pens, and many more valuable things. It took him just a year, and he finally became an intermediate. But that was not it for him, because his visions were beyond that, so he gave his luck a try and got admission in International Relations Department.

Now, after going through all the hardship and ruthlessness of life, Hassan owns a motorcycle, especially designed for physically disabled people that helps himÂ in traveling. And with 80% marks and good reputation among the teachers, he switched from IR to Mass Communication Department. He prefers Print Media over Electronic, because he can write and he believes that written words can speak louder than action.

By looking at Hassan, wandering here and there in the university and struggling day to night just to reach his goals, it is indeed true to say that success doesnâ€™t only come to those who are rich or handsome. It is something that can be gained with high aspirations and bravery. He is an example to the society and to all the students that have seen him or seeing him working this hard. It is people like Hassan who are the real talent that Pakistan needs.

‘No Hunger Hunza Bread’: A Health Miracle From the Hunza Valley