The word dance in sufism is not to bewilder your understanding regarding this ascetic lifestyle. An individual is completely devoted to the Creator abandoning all worldly pleasures. The whirling of an individual with one hand pointing upwards and the other hand pointing towards the ground has a profound meaning.

In this article, we will talk about the origin of sufi whirling; The manner in which it is performed, and the importance of this dance in sufism. 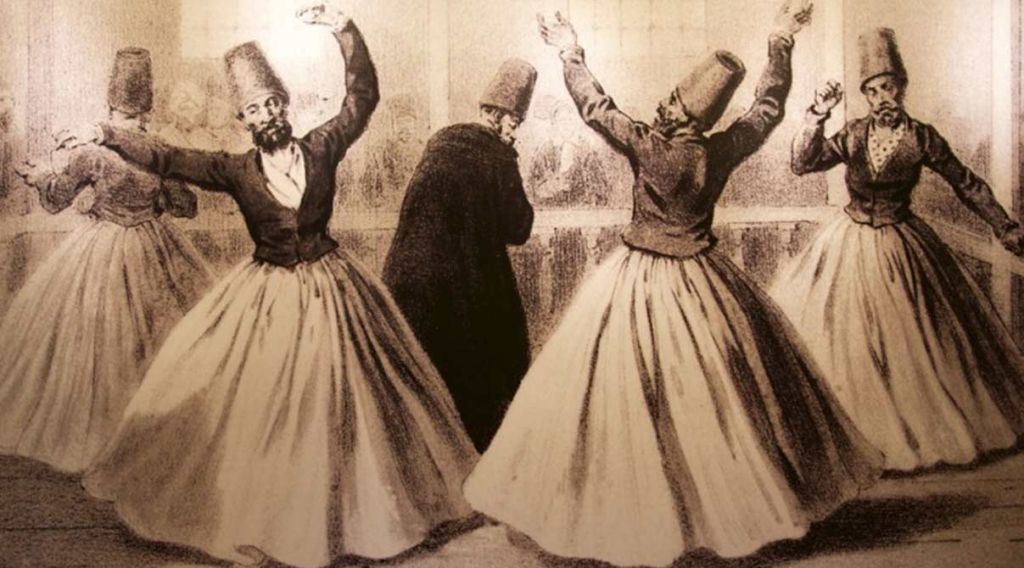 The history of this mystic practice takes us back to the disciples of Rumi. Rumi lived in Konya, the modern day Turkey. They belonged to the Mevlevi order of sufism. Thus, they institutionalized a typical type of whirling dance calling it as Sama. Sama meant to connect with the divine disentangling from the physical being. The word interpreted as ‘hearing’ is considered as the most powerful expression of mysticism. It means becoming one with the Creator.

Sama continued to be practised by the disciples. Therefore, it became the cultural identity of sufism till the arrival of Mustafa Kamal Attaturk. Mustafa restricted its performance. However, the administration lifted the restrictions in the year 1956. They permitted the performance to mark the death anniversary of Rumi, the founder of this meditative practice.

The Whirling Dance of Dervishes 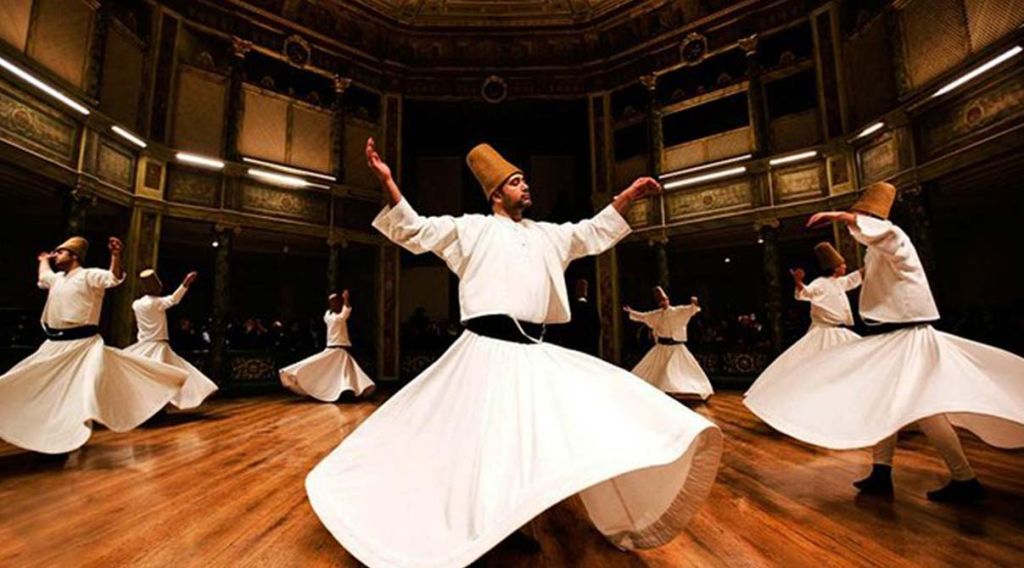 If you critically observe the whirling dance performed by a sufi dervish, it is performed in circular motion at a consistent pace. It all begins from the arrival of all dervishes in a black attire over a white garment. Also, they wear cylinder-shaped hats. Semazinbasi is the chief dervish. He leads the whole performance as all the dervish gradually take off the black attire.

This symbolizes their emancipation from their own ego. The spiritual being left behind develops its connection with the divine. It is represented by the gradual lifting of their right arm and lowering of their left arm towards the ground. All the dervishes form a gradually moving circle. They move at such a slow pace that any viewer would find it hard to tell they are actually moving. The whirling begins alongside the music initially as hymns meant to honor the Holy Prophet.

This is followed by short pieces of music. The music is to raise the soul of the performing dervish. According to Jalaluddin Rumi, music exists as the nourishment of a human soul. And the same happens during the whirling dance of sufism. Whenever the sufi dervish places his foot on the ground while moving in circles, it rejuvenates the existence. Thus, it gives a new life to the individual stepping away from the worldly pleasures of the earth.

The meditative practice introduced by Rumi and his disciplines appear similar to the Dionysian rituals. Since it is about separating body and soul. However, Sama is different. It takes along the whole body from the materialistic chains of the earth to connect with the divine. 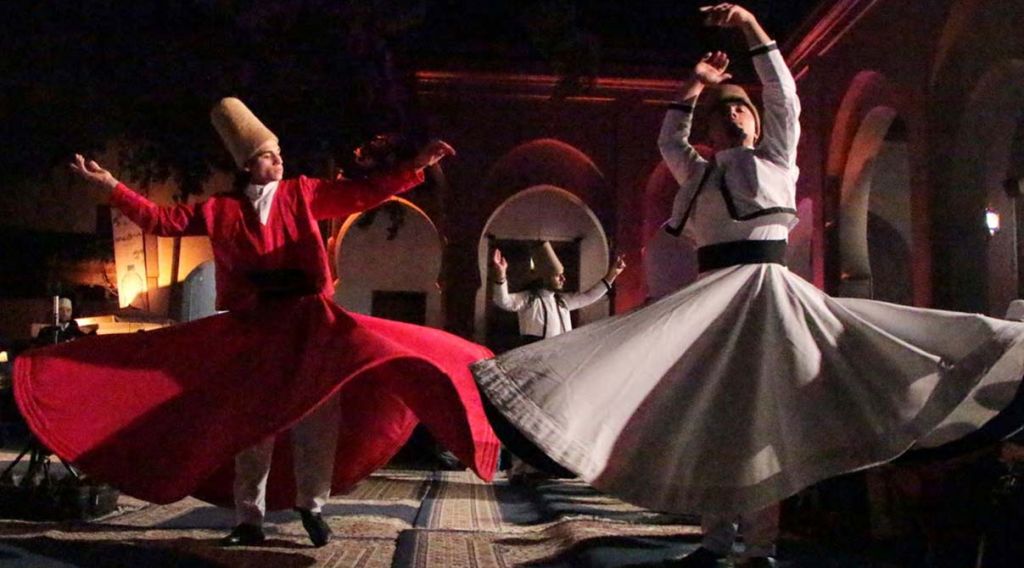 There are multiple interpretations of the mystic performance of Sufi dervishes.

Firstly, worldly desires and materialism don’t interest the Sufi dervishes. They transcend from their physical existence to connect their soul directly with their Creator. It is generally termed as ‘wajd’. So, an exercise is performed in repetitive patterns. Thus, continuous circular motion goes on. This happens alongside chanting the name of God after regular intervals.

The whirling dance represents the circular rotation of stars, planets, and other celestial bodies in the cosmic world. Their circular motion is directed towards their center. That happens without any deviation from their path. Therefore, the Sufi dervish performing the whirling dance also represents one’s connection with the Creator. Hence, they leave aside all the physical distractions in the surroundings.

Another interpretation of this whirling dance is the imitation of the circular rotation of the angels. The angels worship and revolve around their Creator since the beginning of creation and life. The Sufi dervish also considers this as the sole purpose of life. Thus, they become one with the Creator. They revolve in a similar pattern and put aside spatial and temporal restraints.

Affiliation With the Holy Pilgrimage

As you observe in the whirling dance, the revolutions are not circular in nature. Conversely, the dance is spiral in nature. In other words, the Sufi dervish represents the growth and expansion of this connection with time.

The logical deduction from all the above interpretations of this dance is that becoming one with the Creator demands mental and spiritual transcendence. The body is pointed out from the raised right arm. It puts aside the materialistic physical being as represented from the lowered left arm. Next, the person achieves spiritual transcendence gradually and steadily.

Thus, continuous endeavor would help attain your prime goal. This spiritual unity with the Creator will grow. It expands with time as the dervish masters the art of performing the whirling dance. 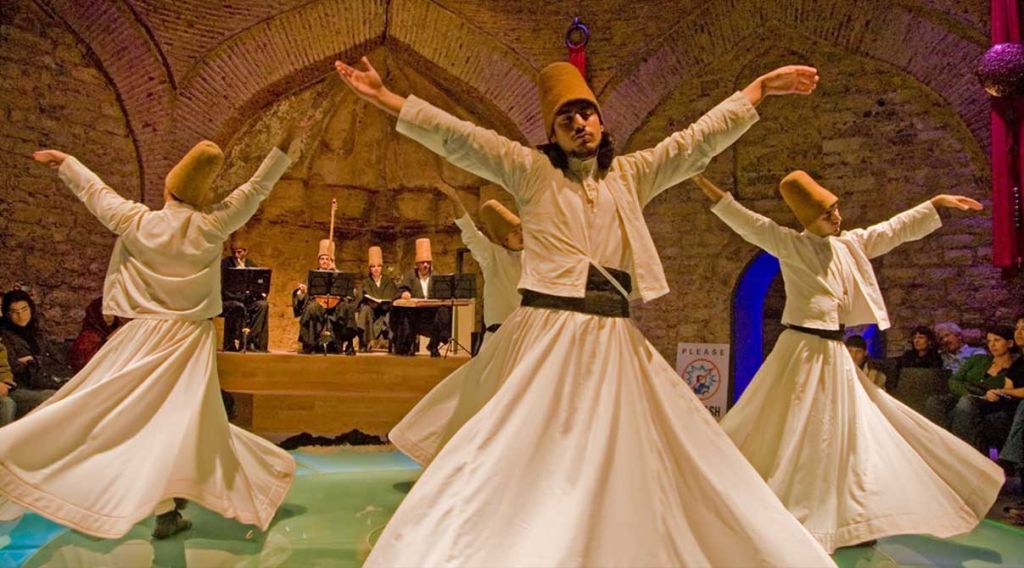 Sufi Whirling has great significance in terms of teaching an individual to liberate oneself from being hedonistic. One has to discipline the body. Thus, it involves staying firm and consistent and stepping away from being stagnant. The individual becomes one with all the celestial bodies in consistent revolutions within their orbits.

Once the dance becomes consistent, the love and connection with the Creator would transcend the individual towards the actual purpose of life being one with the Creator. Listening to the calls of the Creator will achieve the purpose of Sama. That is the reason, a great deal of Sufi saints still practice dance in Sufism.

Cinemas to Open Soon in Pakistan

18 Transgender Attended Class in Gulgasht Colony, Could This be a Great Leap Forward?

Call for Proposals: ‘Film Talents Voices from Pakistan and Afghanistan’