Does Increase In FDI To Pakistan Make It a Better Country For Investment? 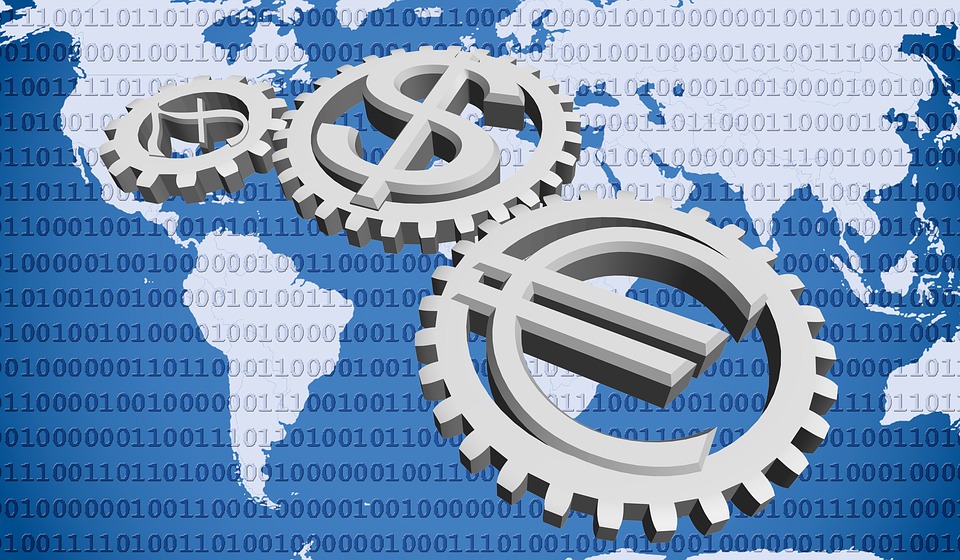 Pakistan has seen an increase in FDI (Foreign Direct Investment) especially in the wake of the $57 billion CPEC project. FDI increased by 5% to $2.41 billion in fiscal year 2016-17 as compared to $2.30 billion in the previous year. The power sector was the biggest recipient of FDI with $795 million in Fiscal Year 2017.

China leads with a 49% share contributing $1.185b followed by Netherlands and Turkey who contributed $463m and $136m respectively. Main sectors for investment remain to be infrastructure, power and trade.

The question arises that despite a hike in foreign investment what is holding Pakistan to become a nation of trust for businesses and companies abroad? According to Sajid Amin, research fellow, head policy solutions lab, Sustainable Development Policy institute, FDI could be divided into two types; efficient and strategic. Efficient FDI depends on ease of doing business, tax structure and technically skilled workforce.

Strategic FDI is based on geographical and political interests. Pakistan, mostly is a recipient of strategic FDI which is not sensitive to market situation. Majority of the FDI coming to Pakistan is infrastructure based. Infrastructure in itself is a tool and mechanism and depends on human capital for furthering. Â Mr. Amin also stated, â€˜Pakistan is way below the bare minimum threshold in terms of skilled workforce.

On average Malaysia takes 3.8 days for operating license, 10.5 days to issue a construction permit and 5.5 days for an import license. For India the days taken for these permits are 17, 30 and 15. In case of Pakistan the days needed are10, 34 and 33 respectively. 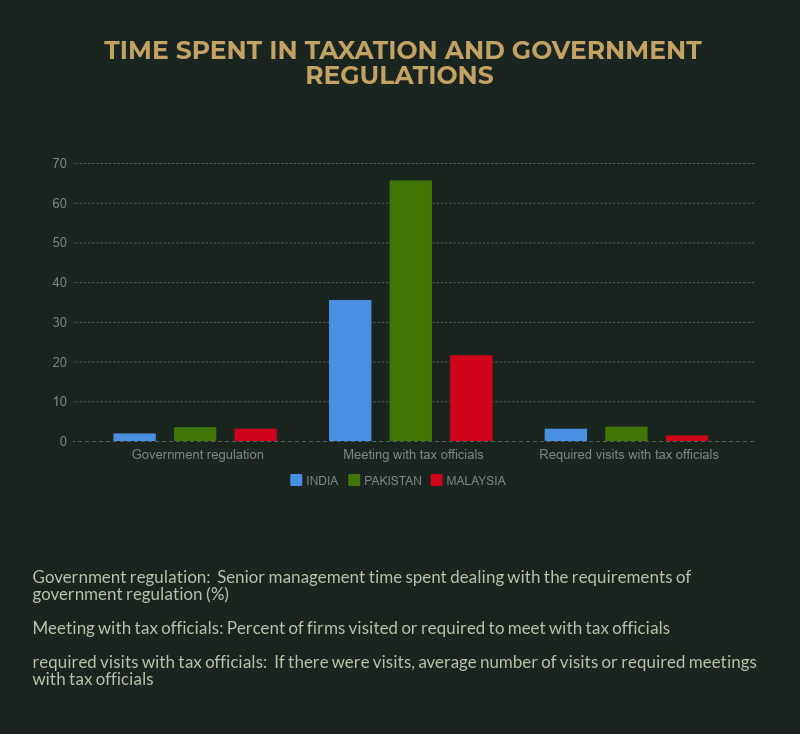 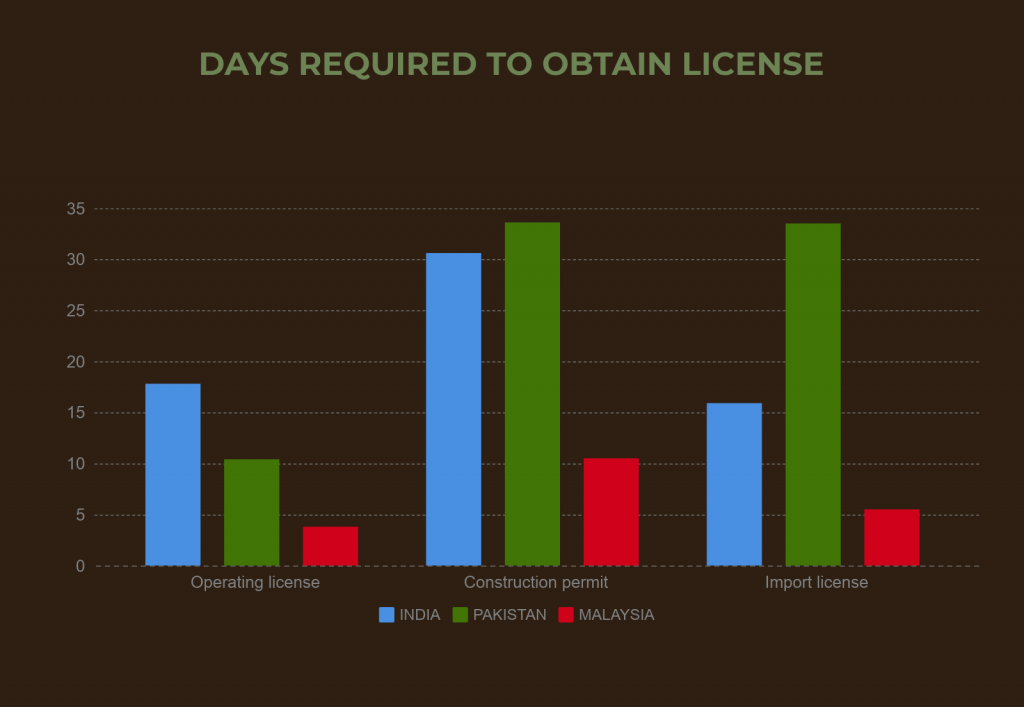 Banking and telecom are two other sectors that saw a major influx of FDI previously which but since these are footloose industries and are standoffish to the development of local resource and infrastructure. Additionally, these sectors do not create jobs which is a major tool in developmental processes.

The score computed by USNEWS for the entrepreneurship holds Malaysia at 1.6, India at 4.5 while Pakistan is at 0.6 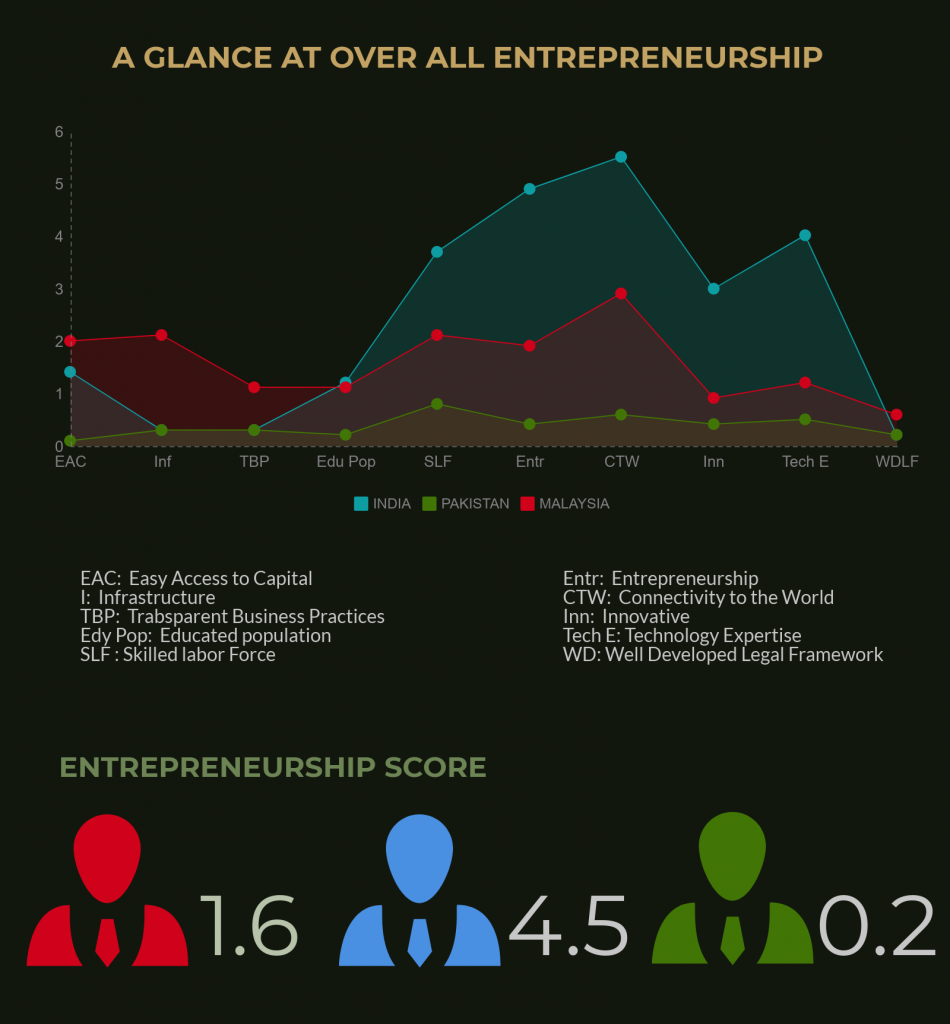 Openness for business metric is computed by calculating the indicators on corruption, favorability environment for taxation, bureaucratic efficiency, transparency in government practices and cheap manufacturing costs. Pakistan does not have a proper FDI policy. Conflict management is often quite lengthy and complicated. Pakistan ranks the lowest at 3.3 while Malaysia has the highest score of 7.4 with India at 5.6. 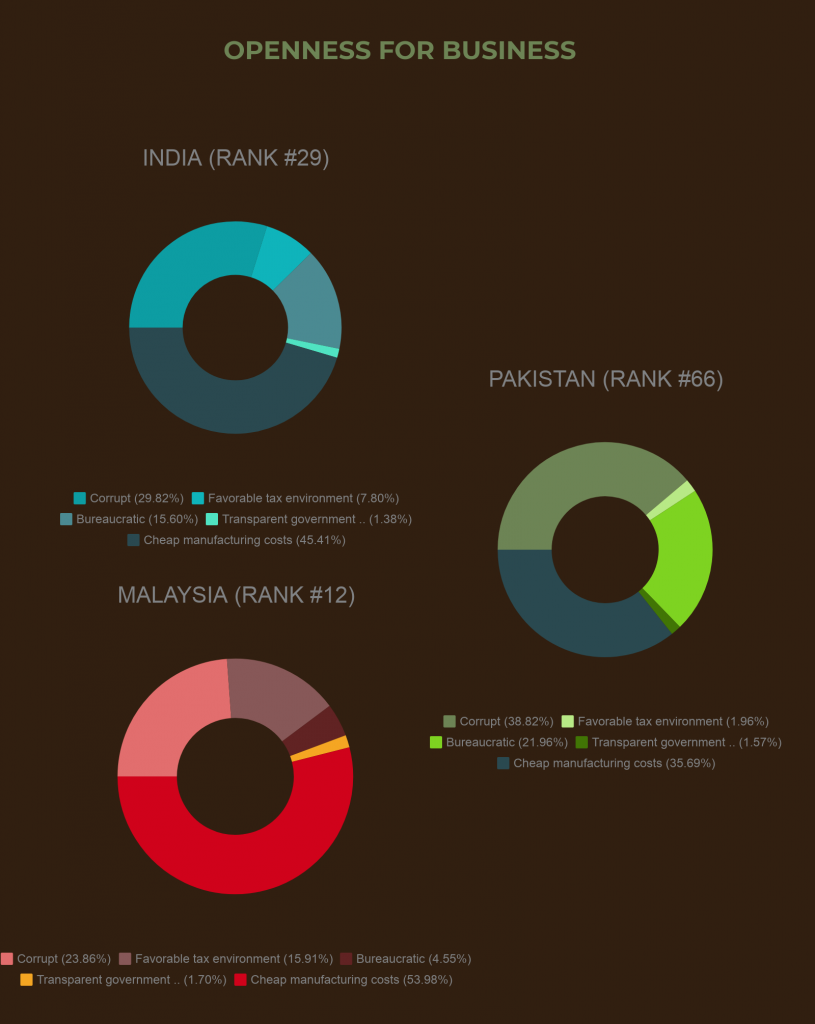 In India five out of fifty firms identify inadequately educated workforce as a limiting constraint while in Malaysia the number is six out of fifty. In the case of Pakistan, twelve out of fifty firms complain about the shortage of properly educated workforce. Similarly, the number of permanent workers out of a total workforce lends to the stability and maturity of the workforce. Malaysia has the highest percentage of permanent labor force which is 83% followed by India at 79% and Pakistan remains at lowest i.e. 76%.

In Pakistan, three in ten firms experienced at least one bribe payment request during 6 transactions dealing with utilities access, permits, licenses, and taxes. For Malaysia and India the numbers are two out of ten firms. Six out of ten firm considered corruption to be a major constraint. In India four while in Malaysia only one firm out of ten had a similar complaint. 34% firms in Pakistan consider court systems to be a major hurdle while for India and Malaysia the stats are 8.7 and 16.7 respectively.