Khabrain Multan Providing Authentic News to the Citizens of Multan

Khabrain Multan: One of the Most Widely Circulated Daily 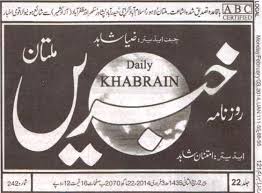 Khabrain Multan is a very popular Urdu language daily that has a good circulation in the city. The newspaper is part of the Khabrian group of newspapers. Daily Khabrain was launched from Lahore back in September of 2000 and has ever since been published from different cities of Pakistan including Multan. Khabrain Multan has a total of fourteen [14] pages in which it covers news on multiple sections. The paper is priced at an affordable PKR 12/- for readers.

Khabrain Multan has its office located in Gul din Colony, Nawan Shehr where all of its news is gathered into one big whole, edited and finally printed in the press. The chief editor of khabrain Multan is Zia Shahid while the editor in charge is Imtinaan Shahid.

There are multiple sections in khabrain Multan such as current affairs, breaking news, sports, entertainment and advertisements. Each of the section is compiled keeping in mind the interest of the readers in Multan.

The advertisements section has an especially strong appeal for the public as it displays a long list of job vacancies for potential applicants.

Daily Khabrain was founded by Chief Editor Zia Shahid in Lahore and Shahid has ever since assumed responsibility of its management.

He also maintains his personal website with the domain name ziashahid.com

Other Cities From Which Daily Khabrain is Launched

Other cities from which Daily Khabrain is launched include Lahore, Islamabad, Karachi, Hyderabad, Peshawar, Sukkur and Muzaffarabad in Azad Kashmir.

Daily Khabrain even has a free e-paper that is available online over the World Wide Web and can therefore be read for free from there.

So if you are travelling abroad and miss out on your routine of reading khabrain Multan, then you can help yourself by logging onto khabrain.epapers.pk and get to read Daily Khabrain there.

The internet therefore allows Pakistani travelers as well as those living abroad permanently to read local newspapers such as Daily khabrain free of charge.

This gives them a feel that as if they are still in Pakistan, and also allows them to stay connected with the latest happenings in and around the country.

However, the e-Paper version is so far made available for khabrain Lahore only. It is expected that others might be added to the list if users show a keen interest in reading e-Papers for other cities as well.

In addition, the Khabrain group of companies also has a TV news channel by the name of Channel 5 which you can watch in Pakistan and overseas.

The channel is quite popular with the public as it provides news round the clock and is one of the first to cover the latest developments. The channel provides news about Pakistan as it breaks and hence keeps its viewer up-to-date.

Syed debuted his career in online writing around five years ago on upwork and has been writing ever since. Other than work, he likes to keep pets, workout at the gym, and follow current affairs.

Top Hotels to Stay in Multan