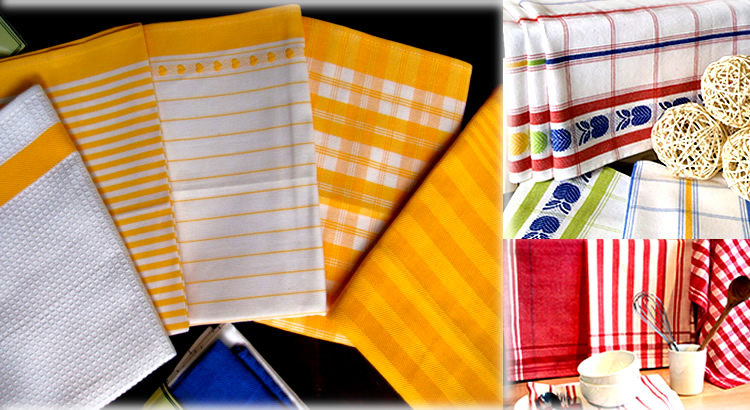 The Importance and Vast Usage of Kitchen Towels in Pakistan

Kitchen is an essential part of any home or residency. Keeping it clean and hygienic is vital for the health of all family members residing in a house as well as the person working in the kitchen. Especially girls and women have to spend most of their time in kitchen to carry routine activities and chores like cutting vegetables, washing and grinding meat, frying and baking, dish-washing etc. Females like to enter the place that is tidy and beautiful rather than a messy one. To keep various areas of a kitchen clean and avoid wet surfaces, kitchen towels are widely used to serve the purpose.

In Pakistan, the domestic kitchen management culture is mostly developed and dominated by women members who are in charge of the home chores. They are very considerate in handling petty things with utmost care and hygiene so that all family members will get to eat and drink healthy items.

Before discussing the Pakistanâ€™s Towel Manufacturing Industry, we will briefly and generally explain the different types and the categorization of kitchen towels according to the cloth they are made of. This piece of information is the most generalized one for both the domestic users and the manufacturers. Domestic users will get to know which kind and cloth-type will be effective when and how, while the manufacturers will get a holistic idea about marketing prospects of their products.

Kitchen towels can be either regular towels that can be washed for reuse or the paper towels â€“ the disposable ones. Separate towels in the kitchen are used to keep it clean as well as to avoid germs spread. They range from drying hands to drying tea, dishes and counters.

The basic purpose of hand towels is to dry hands while working in the kitchen. Even after finishing kitchen work, you should wash your hands either with some antibacterial soap or hand-wash to avoid the potential spread of microbes. It is essential to wash the hand towels regularly to ensure good health and hygiene.

Tea towels are usually placed on trays while serving tea, to absorb spills and also preventing cups and their saucers from sliding in the tray. Sometimes, tea towels are also called as glass towels. Some people use them to dry precious and delicate sets of tea after using and washing. However, their function is not limited and they are also used for:

As obvious from its name, dish towels aim to dry wet dishes after washing them. They are a good replacement for plastic racks which many people use to keep wet kitchen utensils to dry on their own without exerting extra effort. In order to prevent the water stains over precious glass and other dishes, manually drying them with dish towel one by one may take time but will keep them thoroughly dry and give them a clean look. Another way to use dish towels is to place them over some table and then place all the washed wet dishes over them to absorb the extra water from them.

The major function of counter towels is to wipe the kitchen counters after finishing work to give kitchen a clean look. It can also be used to shine the sink after washing vegetables, meat or greasy kitchen utensils. Even drying the wet sinks and attached faucets at the end of day does not only keep them tidy but also give you the freedom of not cleaning them again before beginning any task.

Categorization of Kitchen Towels According to Cloth-Type

The women and kitchen attendants like to use kitchen towels that have more power to absorb liquids and other residues for doing some tasks while for others they need a cloth that is just lint-free. It indicates that the weave and fiber of towels matter a lot while selecting an appropriate kitchen towel to accomplish a particular task.

The major categories of kitchen towels according to their cloth-type are as follows:

Waffle weave generally refers to cotton fiber and this weave makes a kitchen towel that has the complete ability to absorb liquids. It is also known as honeycomb and basically used for drying large kitchen utensils like dishes and pots after washing them. It can also be used in the form of hand towels. It is relatively expensive and durable. It comes in varying sizes from small to large. Choose a kitchen towel of a size that you feel easy to handle.

Terry cloth is made from a cotton material having loops in it. This kitchen cloth is highly absorbent in nature and comes in good sizes too. It is generally used to dry hands, dishes, kitchen counters or bar mopping etc.

This weave is a 50/50 blend of cotton and linen. These semi-linen kitchen towels are by nature lint-free and thus are the ideal choice for drying delicate and precious glassware. They come in interesting and elegant colors as well as complex patterns to select from.

It is a multi-purpose kitchen cloth that is made up of cotton material. These towels are also lint free which are not just used for drying glassware but also employed for covering rising dough, lining bread baskets, drying dishes, polishing silverware and dusting. It is noteworthy to keep separate towels to be used in dusting and polishing from those to be used during food preparation and kitchen services etc.

It is a 100 percent complete cotton towel which is very absorbent in nature. It is generally used as a dish towel besides its use as a folded pad to handle hot cooking/baking pans and removing lids considering proper safety.

These are the disposable towels that come in variety of weaves and absorbencies. Paper towels are used for performing many useful tasks that were previously done by an ordinary kitchen cloth. They are a simple choice for kitchen attendants to use for wiping counter tops, lining bread baskets, cleaning up spills, drying and shining some surface etc. These can also be used to place fried items like French fries, nuggets, potato cutlets etc. over delicate plates to absorb extra oil from them.

But when it comes to cover rising dough or serving as some potholder, paper towels are not a good choice to accomplish the task. However, due to their disposable nature, you can simply put them in the dustbin after using and donâ€™t have to worry about washing them over and over to use them again.

This synthetic towel is a blended production of two materials; polyamide and polyester, interlocked together. The polyamide fiber absorbs well and used for drying items quickly while polyester fiber is mainly used for cleaning and polishing items and surfaces. The distinct qualities of two fibers are united to develop a unique and effective microfiber material. It is a smooth, lint free and hypoallergenic cloth that would enable you to wipe without using different chemicals.

It can be used to clean most of the materials like glass, silver, stainless steel, mirrors, ceramic and marble tiles, rubber, wood etc. It can also be used to wipe carpets, leather and different appliances. These lightweight microfiber towels have relatively longer life time than the traditional towels and mops which makes them an economic choice for use.

According to Textile World Asia (TWA) 2007 report, there were around 7,500 looms installed within the terry towel manufacturing industry of Pakistan, distributed among the organized and unorganized sectors. Since its small scale establishment in 1965, this sub-sector of textile industry has grown over a large scale through adapting to the dynamic global demands.

This industry in Pakistan is administered by a body known as Towels Manufacturers Association of Pakistan (TMAP) which had been classified as an association of â€œAâ€ class under the Ordinance of Trade Organizations 1961 after getting recognition from the Government of Pakistan since June 1981.

Pakistan is a big world-wide exporter of kitchen towels. It provides a good range of kitchen towels with respect to color palette, embroidered and printed products, which comes in various shades, patterns and sizes in the international market. The biggest foreign market for Pakistanâ€™s kitchen towels are the United States. Besides U.S., the other major markets include Canada, Europe, Australia and Middle East etc. International demand for the Pakistani kitchen towels has increased over the recent years due to the best quality products Pakistan manufactures and supplies world-wide.

Almost more than 75 percent of the total produced towel items have been exported to the main consumer markets of different countries to constitute around 8 percent of the world market share.

Despite the higher level of demands, the annual exports of towel products witnessed a decline of 3.2 percent during the year 2013-14 which means the negative growth of towels exports from $645.0 million to $624.5 million within a year (Pakistan Economic Survey 2013-14). This decline with respect to both quantity and value can be a result of:

Top Manufacturers and Exporters of Kitchen Towels in Pakistan

In Pakistan, the towels industry mainly exists in Karachi, Faisalabad, Lahore, Gujranwala, Sialkot and Multan as majority of the manufactures have their production set-up based in these cities. Here, we will list a few of the major manufacturers and exporters of Kitchen towels in the above mentioned cities of Pakistan:

Tips for Proper Handling of Kitchen Towels for Domestic Users

Kitchen attendants in Pakistan have the general habit of using the same kitchen towel for drying hands and dishes instead of separate wipes for both. This may result in spreading harmful bacteria in the house. University of Arizona have conducted a study to find out that apart from toilet bowls and kitchen sinks, the kitchen towels and dishcloths harbour a great deal of bacteria in the home than any other thing. Here are a few useful tips for preventing the kitchen towels from contamination with potentially harmful bacteria:

Among The Believers: An Insight into Pakistani Madrassas