Multan: The City of Saints

Which Pakistani city has been;

The answer to all of the above is Madinat-ul-Auliya, or Multan as it is now known. Madinat-ul-Auliya means City of Saints, which aptly describes what the city is most well-known for. Multan is a city steeped in history and culture, and shows the influence of various civilizations it was a part of. To have existed for literally millennia is no small thing by any measure.

Home to Many Eminent Saints and Their Tombs

Despite its historical wealth, Multan is now most famous for being the abode and now resting place of many Sufi saints, exponents of Sufi belief and culture such as Hazrat Baha-ud-Din Zakariya and Shah Rukn al-Din Rukn-I-Alam, whose mausoleum is considered to be the cityâ€™s structural landmark. Built in the pre-Mughal era by Ghias-ud-Din Tughlaq between 132 and 1324, the dome of the towering structure can be observed from all sides of the city. The dome itself is said to be one of the worldâ€™s largest, a testimony to the mausoleumâ€™s architectural value. The shrines of these two saints are a prominent feature of the cityâ€™s skyline. Other Sufi saints whose mausoleums and shrines have their home in the city are Shah Shams Sabzwari, Mai Mehrban, Bibi Pak Daman, Shah Gardez and Musa Pak Shaheed among a host of at least 17 other saints.

A short account of Multanâ€™s historical relevance would be incomplete without mention of the Nuagaza (nine-yarder) tombs and Multan Fort. The Nuagaza tombs are the final resting places of Muslim martyrs and warriors who died fighting the Hindus. One of the tombs is said to be at least 1300 years old. The Multan Fort on the other hand, no longer actually exists as it was destroyed by the British during their rule of the Subcontinent. It is said to have been built by the Katoch Dynasty (mentioned in the Mahabharata), though there is no accurate record that states when it was built.

There are six gates to the once fortified city, the Daulat Gate, the Delhi Gate, the Pak Gate, the Lahori Gate, the Bohar Gate and the Haram Gate. The gates are built in exactly the same way, but only three, the Delhi, Bohar and Haram Gates remain. 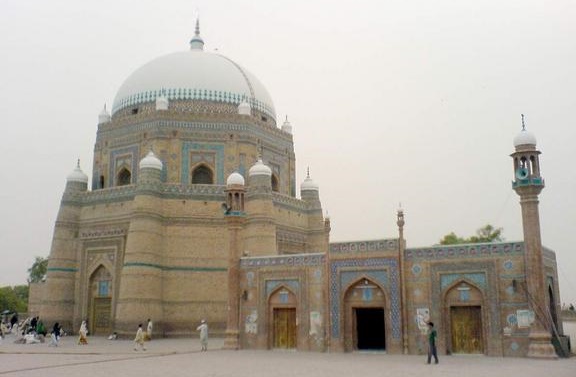 It is easy to get overwhelmed by Multanâ€™s historical relevance, which includes mosques that are considered some of the oldest in South East Asia such as the Sawi Masjid, but this would be unfair to its other cultural artifacts. Two of these are the â€˜Ustaadâ€™ (teacher) and â€˜Shagirdâ€™ (student) Taazia (models of tombs), built almost 200 years ago. These are considered monuments due to their exquisite workmanship. A sightseeing trip to Multan would also be incomplete without visiting the Ghanta Ghar (clock tower), which doubles as the cityâ€™s museum. The Multan Museum boasts of interesting artifacts such as ancient coins, writings, sculptures and carvings. Even today, the city can boast of skilled craftsmen (and indeed women). Textiles from Multan are hand-designed with native embroidery and bright colors. The colors are said to be inspired from the cityâ€™s environs and are representative of Multanâ€™s cultural heritage. The â€˜Ralliâ€™ patchwork technique is an ancient one that has trickled down through the years. The meaning of â€˜Ralliâ€™ is â€˜to get togtherâ€™ and once again is representative of the sense of community in Multan. Â Multan is also known for its Khussas; traditional and often embroidered footwear made from leather. The traditional costume of Multan is the laccha, a loose piece of clothing worn around the waist and legs.

It would take no less than a book to do justice to Multanâ€™s handicrafts: the blue pottery, the traditional shawls, Chunri-making (tie and dye), mirror embroidery, frescos, Khaadi fabric and so many others. For a city so soaked in culture and history however, Multan has its fair share of modern facilities. The city exports textiles, carpets, mangoes and other fruit, surgical instruments and wood products among others. It is one of the countryâ€™s industrial hubs along with Faisalabad, Sialkot, Karachi and Lahore.

Multan is also home to Baha-ud-Din Zakariya University and Nistar Medical College, reputed throughout the country for their standard of education. The city also shares a love for cricket with the rest of country, and has the Multan Cricket Stadium and the Ibn-e-Qasim Bagh Stadium. It has an airport, international food chains, shopping centers and hotels like other modern cities of Pakistan. Last but not the least is this writerâ€™s favorite item from Multan, Multani/Sohan Halwa, a solid sweet made from water, corn flour, saffron flavoring, sugar and milk. Other ingredients are added as per preference. As a food lover, I had to save the best for last!

Multan is truly an eclectic mix of history, culture, and inevitable industrialism, a city like no other. In times when we seem to be in doubt of our identity as a nation, we need to look no further than the history and culture of our people to rediscover who we truly are.

Sindhi Embroidery – Yet Another Gift From Gujrat