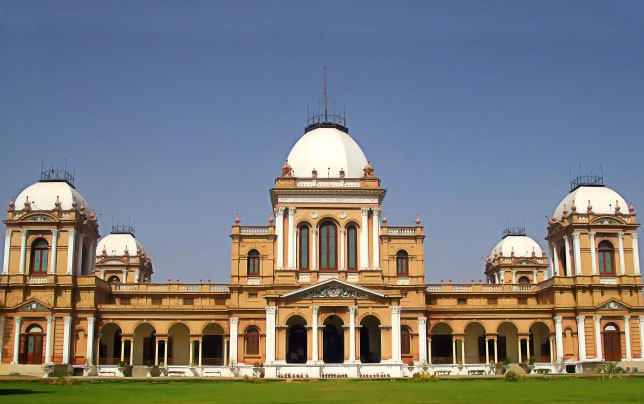 Noor Mahal (the Palace of Light) is situated in Bhawalpur, which is the 12th largest city of Pakistan and was once the capital of the Princely State of Bahawalpur. A  It is one of the few palaces that we can find in our country. It was built in 1875, taking three years to complete. There are believed to be a number of reasons why it was constructed, but the most popular one is that, Nawab Sadiq Muhammad Khan the Fourth (fifth ruler of Bhawalpur state) had it made for his wife Noor.

He was also known as Shah Jehan of Bhawalpur, because of his love for constructing grand buildings there. However the Nawab and his family only spent one night in this palace, because his wife was not comfortable living in a place that was near to a graveyard. Subsequently it was used as a state guest house; the Nawab held state meetings, and the court was used by him to address his courtiers.

Noor Mahal was designed under the supervision of a British engineer; Mr. Hennan. It stands amidst a huge garden with fountains, and covers 44, 600 square feet in area. It is double storied having six verandahs and 32 rooms, out of which 14 are in the basement.

It is said to resemble an Italian chateau, because of the style of its windows. However it is modeled on the lines of both Greek and Islamic architectural styles.

The Greek Corinthian order is most elaborate in its design and is used in columns, balustrades, pediments and arches. The Durbar Hall is a fine example of that. While the five domes made of stucco (a decorative coating used on terracotta bricks, cement or wood) which are a striking feature of the palace are an example of Islamic Art.

Furthermore Islamic Arabesque (another Art form) can be seen in the vaulted ceiling and eye-catching mosaic tiled floors which add to its splendor.

The total cost of building and furnishing amounted to Rs. 1.2 million, which is evident from its exquisite architecture as well as having a beautiful decor of ornate furniture, curtains of heavy brocade with pelmets, carpets and crystal chandeliers (studded with diamonds), while stunning paintings and artwork adorn the walls.

The collection also includes a portrait of Quaid-e-Azam Muhammad Ali Jinnah playing Poole. A  That actual table with the pool sticks was gifted by him to the Nawab. Most of the materials and furniture had been imported from Britain and Italy. A  Furthermore a baby piano was imported from Germany and mirrors were imported from Belgium.

The palace had a natural cooling system, as there were small rooms in the basement where cold water was kept, and the water vapours would reach the rooms by means of openings in the floor, this is how the warm air was dispelled out through the small windows which were built at the top (In present times this has been replaced by air conditioners).

It is a matter of great honor that in 1890 His Highness Prince Albert Victor (the grandson of Queen Victoria) stayed for one night at the Palace. Also in 1897 a court was held to celebrate Queen Victoria’s 60th Birthday.

In 1906 Nawab Bahawal Khan the Fifth (later ruler of Bahawalpur) established a mosque on the premises. In the 1920s repairs had to be done.

In 1956, when Bahawalpur became part of Pakistan, the palace was taken over by the Auqaf department (one of its functions is to look after different types of monuments) under the Antiquities Act 1975 (a law related to conserving all antiques found anywhere in Pakistan).

In 1971 it was rented by the Pakistan Army. Then in 1997 it was bought by the Army, which then spent two years in restoring it to its former grandeur. After that it was used by the Army as a Garrison club, guest house and for holding meetings of dignitaries.

In 2001, it was acknowledged to be a protected monument by the Government of Pakistan’s Department of Archeology, which looks after it.

In 2009 and 2010 respectively it was used as a set for Drama serials such as Noor Pur ki Rani and Noor Bano.

So it is indeed our privilege to have a gem of a palace such as Noor Mahal to be part of our cultural heritage, a must see landmark to be visited by foreigners as well as ourselves.

The Metamorphosis of King Zain-ul-Abidin