Nowshera is one of the most developed districts of Khyber Pakhtunkhwa. The district has a strong industrial and agricultural base and is well-connected to the rest of the province. The district is home to many large industries and businesses and has a thriving economy. Nowshera is a popular tourist destination and is popular for its scenic beauty and historical sites.

Learn more about the geographical and economic importance of Nowshera in this article.

Nowshera: What is the District Famous For? 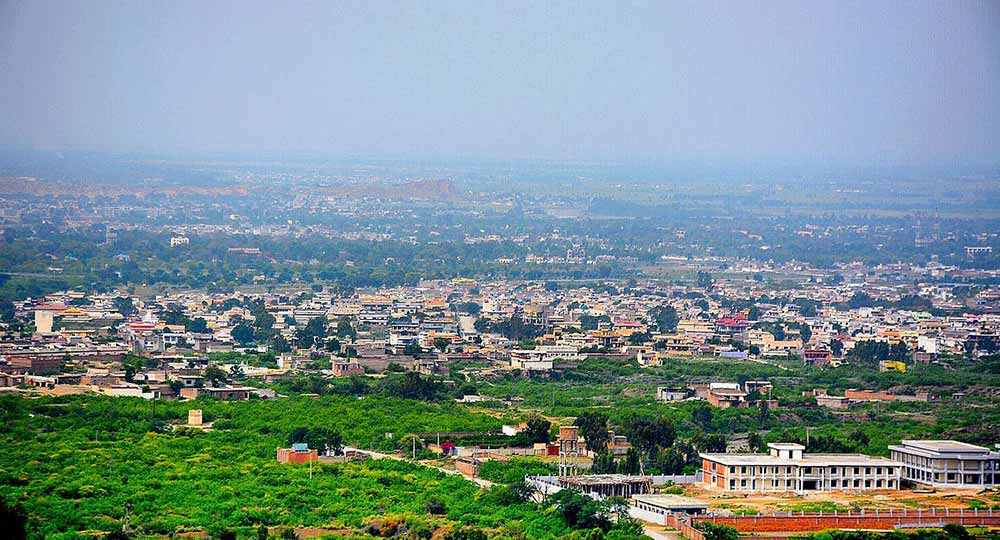 Nowshera is a district of Khyber Pakhtunkhwa, located in the northwest of the province. The district is bounded by Peshawar to the west, Mardan to the southwest, Swabi to the south, and Charsadda to the east. Nowshera has an area of 1,748 square kilometers and a population of 120,13 (2017 census). It is the 78th largest city in Pakistan.

The city of Nowshera is the district headquarters. It is located on the bank of the Kabul River, about 30 km from Peshawar. Nowshera is one of the most developed districts of Khyber Pakhtunkhwa. The district has an economy based on agriculture, forestry, industry and trade. The district is also home to a number of educational institutions.

The landscape of the district is mostly hilly with some plains. The hills are part of the Safed Koh range which runs from northeast to southwest across the district. The highest point in the district is Takht-i-Bahi, a hilltop Buddhist monastery dating back to the 2nd century CE. There are several small rivers in the district, including the Kabul River which forms its western boundary. 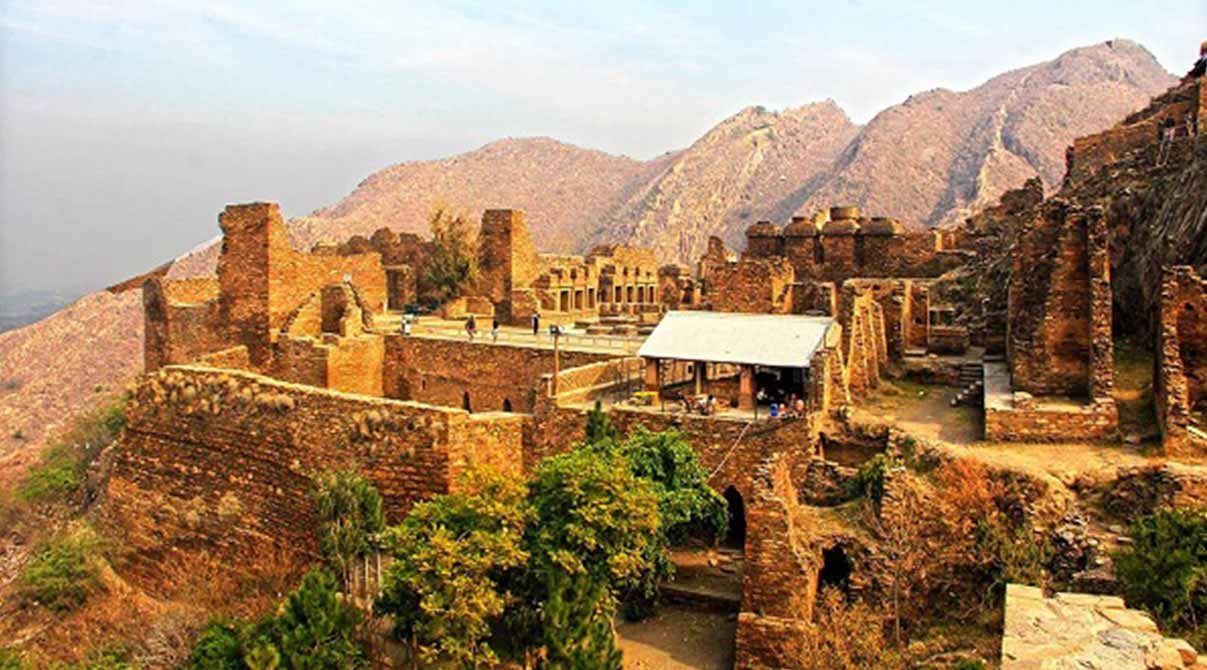 The area around Nowshera has been inhabited for thousands of years. The region was once part of the Gandhara civilization. The ancient kingdom of Kapisa was also located in the vicinity of present-day Nowshera.

During the Afghan Durrani Empire, Nowshera came into being. The Pashtun army engaged Ranjit Singh’s Sikh Khalsa Army in the Battle of Nowshera in March 1823. The Durrani governor Azim Khan Barakzai supported it. The Sikh Empire defeated the Afghans with ease in the fight, which resulted in their possession of the Peshawar Valley.

Prior to its annexation into British India by the Durand Line Agreement, its name was Nowkhaar Province. Nowshera was a portion of the Peshawar District before it became a distinct district in 1990. Up until Pakistan’s government reforms, the district was also a part of the Peshawar Division.

Nowshera was a town, a cantonment, and a tehsil of the Peshawar District while it was governed by the British (later Peshawar Division). The Grand Trunk Road and North-Western Railway both passed through the town. 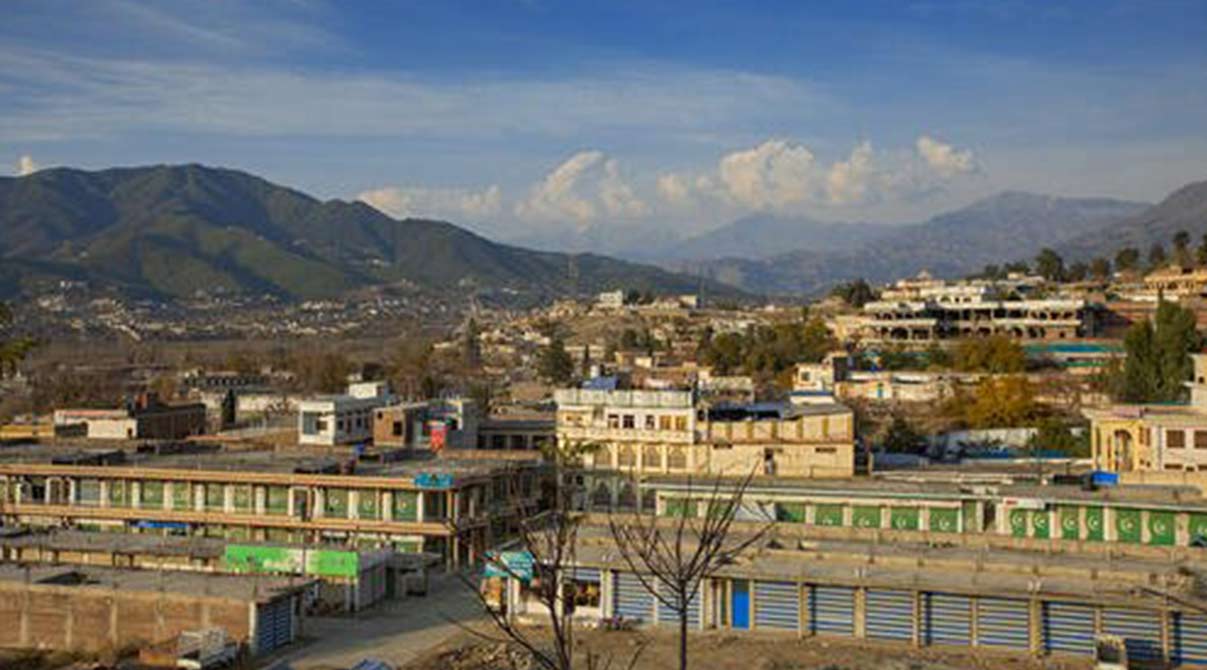 The economy of Nowshera is based on agriculture, horticulture, and its industries. The city’s major industries include textile mills, cigarettes, beverages, ceramics, edible oil, and ghee industries. It also earns revenue from its soap and shampoo industry. These are some of the industries that majorly contribute to Nowshera’s economy. However, there are hundreds of other small industries also in Nowshera that play a part in revenue generation. 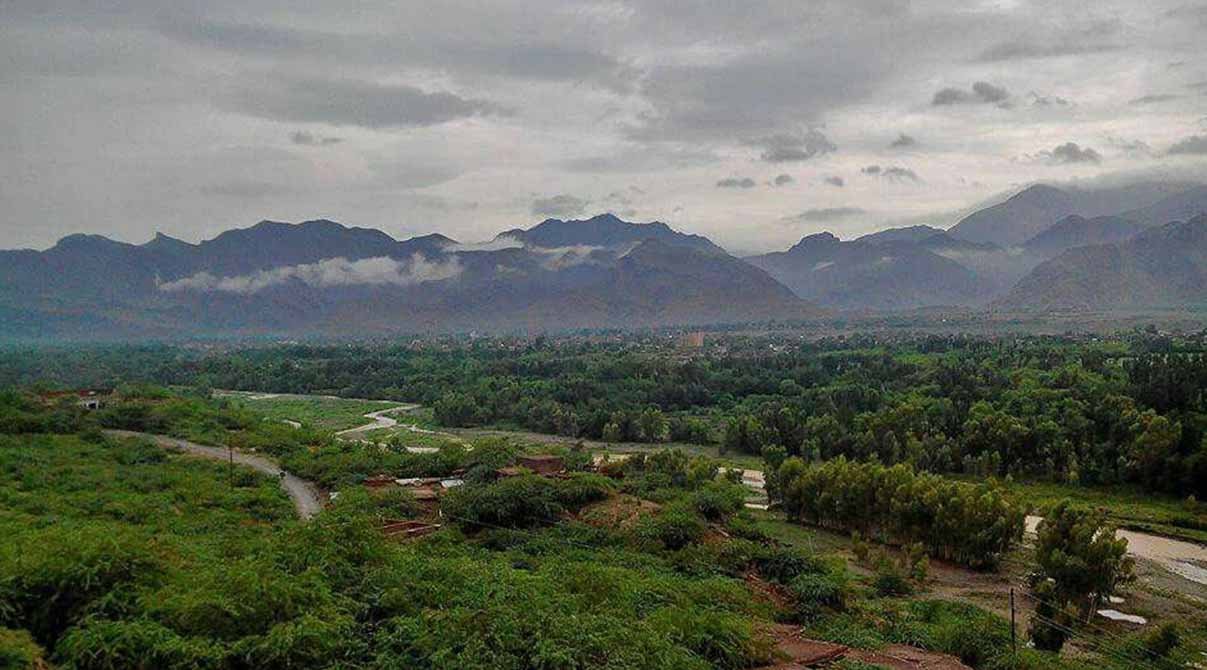 Nowshera is an agricultural district in the Peshawar Valley of Khyber Pakhtunkhwa province in Pakistan. The district is irrigated by the Kabul River and its tributaries. And it has diversified agriculture including wheat, maize, rice, sugarcane, cotton, tobacco, fruits, and vegetables. Nowshera is also known for its livestock industry and produces milk, meat, and eggs.

The production of cereal crops (such as wheat, maize, and others) and cash crops (such as sugarcane) is a significant comparative advantage for the Nowshera District (According to the 2015-16 Crop Statistics report of the Agriculture Department of KP).

In practical terms, Nowshera’s agricultural output is among the highest in the entire province, in large part because of the irrigation system and the fertile soil. Because of this, this area is home to numerous grain mills and a British American Tobacco industrial complex.

The winters are brief, chilly, and often clear in Nowshera Cantonment, while the summers are lengthy, hot, and humid. The average annual temperature ranges from 38 to 106 degrees Fahrenheit, rarely falling below 33 or rising over 112 degrees.

Although there has been a reasonable development in the agriculture industry, there is still room for growth and development to make it a sector capable of competing in international markets.

Nowshera is popular for its lush green gardens and orchards. The climate here is ideal for horticulture, and the soil is rich in nutrients. Nowshera’s horticultural industry employs many people and contributes significantly to the local economy.

According to the Agriculture Department of KP’s 2015–16 Crop Statistics report, Nowshera has a total area of 52,528 hectares, 53,802 hectares of cropland, and 125,542 hectares of uncultivated land.

Nowshera is also home to a number of large nurseries that supply plants and trees to the rest of the country. The horticultural sector in Nowshera has been growing rapidly in recent years, thanks to increasing demand from both local and international markets.

Given the arrival of CPEC in KP, it is imperative that Nowshera District’s horticulture will strengthen. So that it can grow into a significant “Fruit Supply Center” for China, Afghanistan, and Central Asia.

The Cherat coalfield, which is located in Nowshera district, has coal reserves of 7.74 million tonnes, according to research done by the Department of Mining Engineering at UET Peshawar. These reserves were discovered in the Cherat range’s Shekhai, Jabba Khattak, Bakhtai, and Shah Kot areas.

Moreover, 13 mines are currently in operation in Korba, and four more are in planning. Ten of the active mines are not making much profit, while 95% of the coal is produced by the three profitable mines, Gevra, Kusmunda, and Dipka. These coal mines have coal reserves of millions of tons.

Development Company (PASDEC) reports that the Nowshera district has marble reserves totaling 520 million tonnes. The mining industry in Nowshera contributes significantly to the economy of Pakistan. It is one of the largest sources of revenue for the government and provides jobs for many people in the district.

In particular, it produces enough quantities of limestone, shale clay, dolomite, latrite, and slate stone to satisfy both domestic and regional demand. Along with several hundred marble units, the district already has a cement mill in operation.

The textile industry in Nowshera is known for its high-quality products. The products manufactured by the industry are exported all over Pakistan. The industry has a modern infrastructure and makes a large revenue by using up-to-date methods. 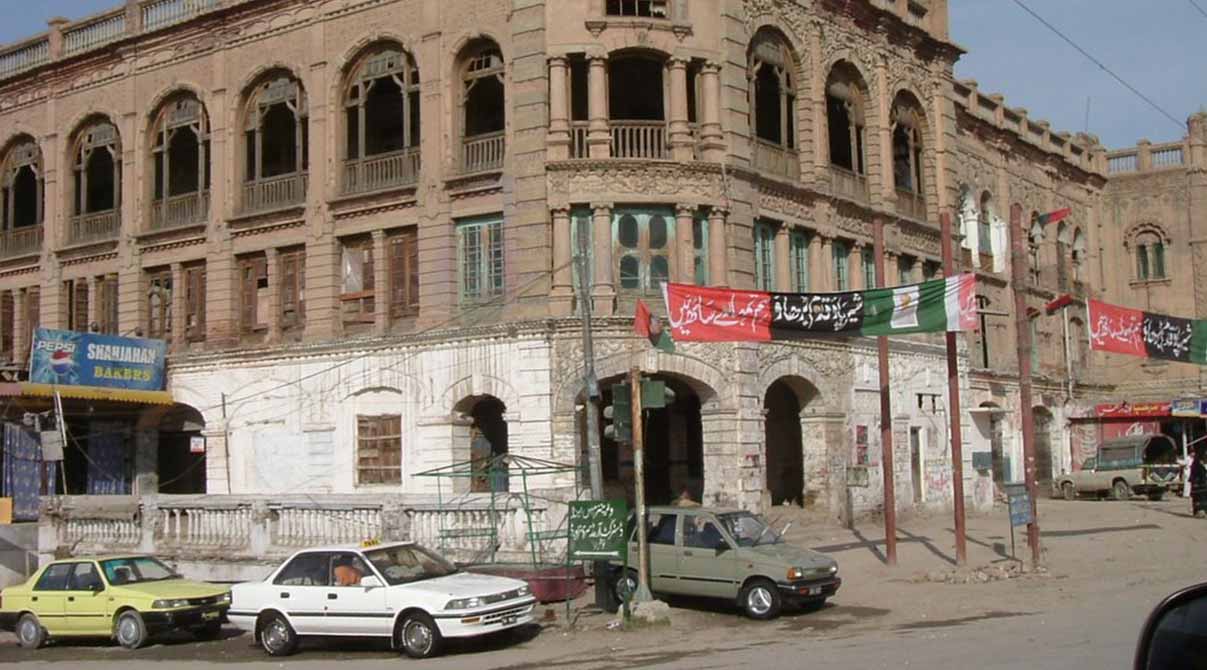 Nowshera is committed to developing economic zones that spur investment and promote growth. The government has decided to offer a variety of incentives for businesses that locate in designated economic zones, including tax breaks and access to infrastructure. Economic zones are an important part of Nowshera’s economic development strategy, and the city is working hard to attract new businesses.

The Nowshera Economic Zone will provide a platform for the development of light engineering, textile, and other industries. It will also create opportunities for the establishment of support industries such as IT, banking, logistics, etc. It can accommodate more than 60 industries and factories.

The NEZ will have a dedicated power plant and a state-of-the-art infrastructure including water treatment plants, sewerage facilities, roads, and drainage. The zone will also have its own security force and fire brigade.

After the success of the Nowshera Economic Zone, the KP government decided to extend the zone to give area to more industrial units. So forth, it was another significant step toward the industrialization of the province and the creation of job possibilities. The initiative would open doors for the pharmaceutical industry, food processing, building materials, marble, granite, and food packaging, while industrial goods from the zone might end up in high-demand regions like Afghanistan, Central Asia, and China.

A flagship project for industrial cooperation along the China-Pakistan Economic Corridor (CPEC), Rashakai Prioritized Special Economic Zone (pSEZ) is a 1000-acre site that serves as the CPEC Special Economic Zone. CRBC will develop the 1000 acres of the pSEZ in collaboration with KPEZDMC.

For the purpose of carrying out this agreement, these two businesses have established an SPV company called Rashakai Special Economic Zone Development and Operations Company (RSEZDOC).

Situated on Motorway (M1), alongside CPEC route, it is 60 km distant from Peshawar to the west and 90 km apart from Islamabad to the east.

Rashakai has a distinct strategic advantage in that it is located 800 km from the Khunjerab Pass in the north, 111.6 km from the Torkham Border, and 39.6 km from the Azakhel Dry Port. Thus, allowing it to cater to the consumer markets of Khyber Pakhtunkhwa, Punjab, Southwest China, Afghanistan, and Central Asia. Fostering a climate that is conducive to business in order to draw in foreign direct investment and relocate the high-tech sector, opening the door for technology transfer.

It is located at Jalozai Industrial Estate. The 257-acre Jalozai Economic Zone, which is a facet of the China-Pakistan Economic Corridor (CPEC), will alter the game for the region by creating up to 50,000 direct and indirect jobs and attracting an estimated Rs8 billion in private investment.

The economic zone offers promising possibilities to corporate investors and entrepreneurs who either aim to grow their present firms or to come up with new startups, being close to the provincial capital and opposite to the engineering university campus and new housing project.

Businesses including pharmaceutical, food processing, building, marble, granite, food packaging, and furniture will profit from investing in the new economic zone due to the accessibility of labor on a local level.

To sum up, Nowhera is an economically developed district in Khyber Pakhtunkhwa, Pakistan. Investors have several prospects in the Nowshera district in the areas of oil and gas exploration, agribusiness assistance, the value chain for mining and mineral processing, and the creation of special economic zones on a priority basis.

Investment from national and international companies specializing in the aforementioned industries can generate profits for the district economy and open up job opportunities for the locals under the right investment conditions and sustainable development plans.

Government should place more focus on enhancing the current industries so that Nowshera can become a Multifaceted Hub of Mineral processing, Construction, Manufacturing, and Agriculture.

Once businesses begin operating in Rashakai Special Economic Zone, the local economy would experience a considerable boost. A hydrocarbon deposit in the Nowshera block has also been discovered, which includes the districts of Mardan, Charsadda, Swabi, and Buner, offering national and international companies a joint venture potential for exploration and production.