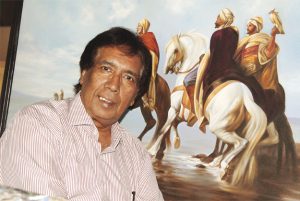 Pakistan seems to be yet too backward when it comes to talking about painters, sculptures, and artists. There are not many that were blessed enough to engrave their names in the minds of people, excluding Gulgee, Shazia Sikander, Ahmed Pervez, Amin Gulgee, Sadequin, and a few more, who became eminent by luck and education. Whereas, there are plenty of other unnoticed artists this land has given birth to, but they are neglected because either they are impoverished or ignorant. Among these unfortunates comes the name of Sarfraz Iqbal, who has years of experience in poster paintings but dismally known to a few.

Sarfraz Iqbal is a legend that has been constantly overlooked in our country. The 68 years old painter has been working as a dedicated artist for Lollywood over several years now, yet his colossal work and paintings have gone unnoticed. Only recently his name came up on different media platforms when he painted the main poster for the movie â€œZinda Bhaagâ€. As flawless as it can be, Iqbal painted the poster so well that it is hard to grasp over the fact that such talented man is a part of our film industry.

His father, Sardar Khan, who was also a great painter of his time, passed on his painting germs to his son. Sardar Khan himself had collaborated in many films in Bombay before the Indo-Pak partition, and that was the time when Sarfraz saw his future in painting, so he learned all the magical strokes from his father until he mastered this profession. Sardar Khan did not only inspire his son, but many other youngsters jumped into the profession of painting during those days mainly because of him.

Right after entering in 8th grade of his school, Sarfraz stepped into the world of Lollywood, and it was only a matter of time when half of the Lollywood filmmakers knocked Sarfrazâ€™s door with their posters ideas. Sarfraz confessed that he was so busy with his paints and brushes back then that he would hardly get an hour free. Those were the days where paintings were done by hands on canvas as the technology was still finding its ways into our world. His job was to pick the best scene from a movie and paint it down in such a way that it would engage the audience. There were no trailers, no promoting brands, and no publicity stunts; only posters were the source to address the masses, and that was one of the reasons why S. Iqbalâ€™s work was cherished and respected by the filmmakers.

Sarfraz profession was on his best during the 70â€™s. The first film he worked for was a Punjabi movie. Later, he covered almost every film of experts like Waheed Murad, Nadeem, and Rangeela, and also worked for famous directors like Nazarul Islam, Syed Noor, and WZ Ahmed. His own favorite painting was the one he created for Sajjad Gulâ€™s film Dooriyan. His latest work includes poster painting for Zinda Bhaag and Ishq Khuda, and only recently few of our media channels got to know about Sarfraz when Zinda Bhaagâ€™s director Farjad Nabi made a documentary on S. Iqbalâ€™s life named The Final Touch. Since S. Iqbal was so busy with paintings that he could not keep a record of his work, Durriya Qazi, an Art professor in Karachi University is very much willing to find all of his paintings and preserve them for record. His work is indeed a pride symbol for all of the Pakistanis across the world who still believe that our country is illiterate about art and craft.