Strikingly, the old village is titled after a well known Mughal Dervish Shah Allah Ditta and holds a significant presence for its evergreen historical background and beauty that overflows like a river. The age of this village is over seven hundred years and it has been utilized as a route connecting Kabul with Gandharan (city of Taxila founded by Sher Shah Suri and Alexander) while other emperors and Mughal rulers frequently passed through specially when they travelled across Afghanistan to Hindustan.

Most surprising fact depicts that there are preservatives in the cave that is located at the Shah Allah Ditta village. The remains are said to be from Buddhist era and are 2,400 years old. The remains are settled under the layer of Margalla Hills because the Buddha murals existed on the cave walls at the Shah Allah Ditta. About 15 kilometers from Golra intersection, this site demands for immediate attention from Department of Archaeology. The historical places must come in the limelight as it does not only carry remains from Buddhist era but also relics of Aurangzeb period and Hindu period (8th century AD). 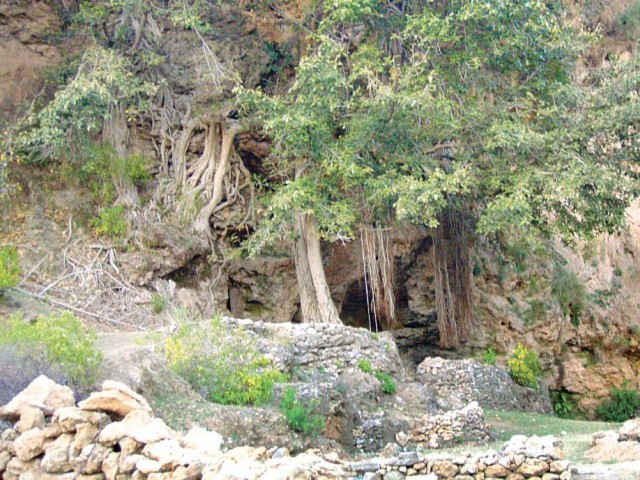 The caves have taken shape of tufa which is a thick, rough; rock-like carbonate deposits that formed by precipitation of water bodies with richly dissolved calcium substance. It has a stream of about 17 meter below. The research that was conducted by Taxila Institute of Asian Civilizations figured out that tufa deposits exits from late period of Pleistocene and tufa deposits have a thickness of about 17 meters maximum.

Not One – There are Two Caves at Shah Allah Ditta

It is astonishing to know that there are not one but two caves which further divide into two portions. These caves are organized naturally in the form of crescent on the tufa rock at Margalla foothills. This cliff seems to be situated at Margalla Hills base and noticeably, it has Taxila (an ancient city) on the back. Adding more to the captivating story, caves also possess a water stream running from the middle. The water stream gets collected in pond made by a man. Also, an arch opens into the pond and there are steps leading down the water. What an indescribable vista it would be?

The antique caves own an underground springs of hot mineral water. The locals believe that the water has the power of healing any ailment. These caves also have religious significance for local people because the devotees visit this place quite often. There were omens of burning “diyas” on walls of the cave that and many amulets or “taveez” were also tied around the roots of Banyan trees. The outdated Banyan trees are interconnected with these caves so firmly that they have turned out to be a major part of it and façade. The outer wall of Shah Allah Ditta caves present red toned (mud plaster) paintings. These paintings are like drawings with terracotta red and black paint. Unfortunately, visitors have completely vandalized paintings. Only a human eye is left that can give us the clue of paintings on those walls. Relics of flaked artifacts and red pottery of limestone have discovered around the ancient Shah Allah Ditta caves.