The Wonders of Handmade Rallis (Quilts)

Colorful quilts with contrasting patterns, themes and fabrics have been quite trendy in Pakistan and across its various cities since ages. The rural areas have all the rights to wear the crown for being the hub of handicrafts, which not only build significance for Pakistani locals around the world but the amazing handmade creativeness of the villages also help feeding many mouths of poor families who have no such way to earn money but through their innovative hand skills. Women play a major part in this case, since they are not only nurtured to give birth to children, but also trained to help men to run their houses and endure the expenses via their tribal artistry. Among those skills come Ralli making, which is among the extensively used handicrafts in Pakistan. These are purely handmade Rallis and embrace rather a lot of tough grind and take days to come into their amazing forms.

The word Ralli is mainly derived from the local word called â€œRalannaâ€, which means mixing and connecting. The name also comes with different pronunciations around the country depending on the regions and languages; these include pronunciations like â€œRilliâ€, â€œRaleeâ€ and â€œRehliâ€. It is said that the patterns and the block work on these quilts are similar to those adornments that were instigated back in the Indus Region almost three hundred years ago. The similar designs and patterns were carved on the ruins of various tombs in Sindh and Balochistan, and also resembled to the painted potteries that were as old as the 2000 BC. Surprisingly, the painted potteries were created by women back in the old days too; the fact is corroborated by the historians as they witnessed to see the female fingerprints left on the colored pots. 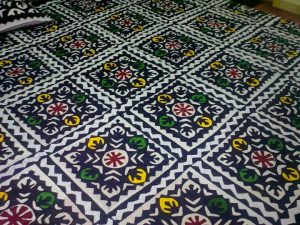 These quilts are largely created in the rural areas of Sindh, Balochistan, some of the regions near Northern Punjab, along with Indiaâ€™s Rajasthan and Gujrat neighboring Sindh province. The colorful fabric are often painted with the desired colors of the painter, and then cut into square shaped pieces which are joined together later to create long quilts. Often, the quilt makers use worn and old fabric pieces that are no longer in use; they also use a worn shawl as a base for the fabric patches that are sewed on the top of it later. Colors like dark blood red, dark blue, yellow, dark green and purple are widely used in quilt making. These colors also represent one of the other eminent handicrafts from Sindh, named as Ajrak.

Since the Ralli quilt enfolds such enriching history and beautification, there are three categories that distinguish the styles and patterns of its differing forms. These basic styles include the Embroidered Rallis, the AppliquÃ© Rallis, and the most famous Patchwork Rallis. Patchwork is made by cutting square or triangle shaped fabric pieces and joining them together to form a quilt. AppliquÃ© on the other hand doesnâ€™t restrict to certain shapes as it can be made through any shape or pattern as the creator likes, and lastly, Embroidered quilts are created by beautifying quilts with various embroideries, mirrors, motifs, and needle-works. These sorts of quilts are used as gift to the brides at the time of their wedding largely in the rural areas as a trend.

Experts can easily spot out the region of each Ralliâ€™s origin by simply looking at it because of the diverging prototypes and cultural essence each quilt embraces. Rallis from the southern part of Sindh contain yellow, black, white, and red color themes precisely, whereas the Rallis from the middle Sindh area comprise more colors like orange, green, blue, purple, and sometimes pink as well. If you happen to see a quilt from the Punjab area, you will see how the quilts are a combination of 9 path blocks with a hint of appliquÃ© block work. Lastly, the Cholistan region follows more muted colors on their quilts, whereas the Upper Sindh is famous for sporting complex patterns of appliquÃ© mainly with multiple numbers of various borders.

The designs of Rallis are now becoming a part of the latest fashion trends and brands, which are offering the same themes and colors by glamorizing them on women dresses which are quite demanding and expensive. This new trend of clothing not only giving more life to the long lasting artistry of our rural areas, but also giving the needy people a way to earn more money for their living.

Cross Stitch: One of It’s Kind