Is Pepsi Battle of the Bands Able to Revive the Local Music Scene?

Pakistan is a diverse and multi-ethnic country. Our music is as diverse as our population. From qawwali to rock ‘n’ roll it includes a range of music elements from South Asia, Central Asia, Iran, Arab, Turkey, and the West. With such a variety of influences, Pakistani music has found its own distinct voice. Like all sectors of performing arts, Pakistan’s musical scene suffered during the dictatorial regime of General Zia ul Haq. The boom it saw during the 60s and 70s died down in the 80s and 90s. However, this era saw a plethora of nationalistic songs sung by Madam Noor Jehan and various bands such as Vital Signs.

Introduction to Pepsi Battle of the Bands 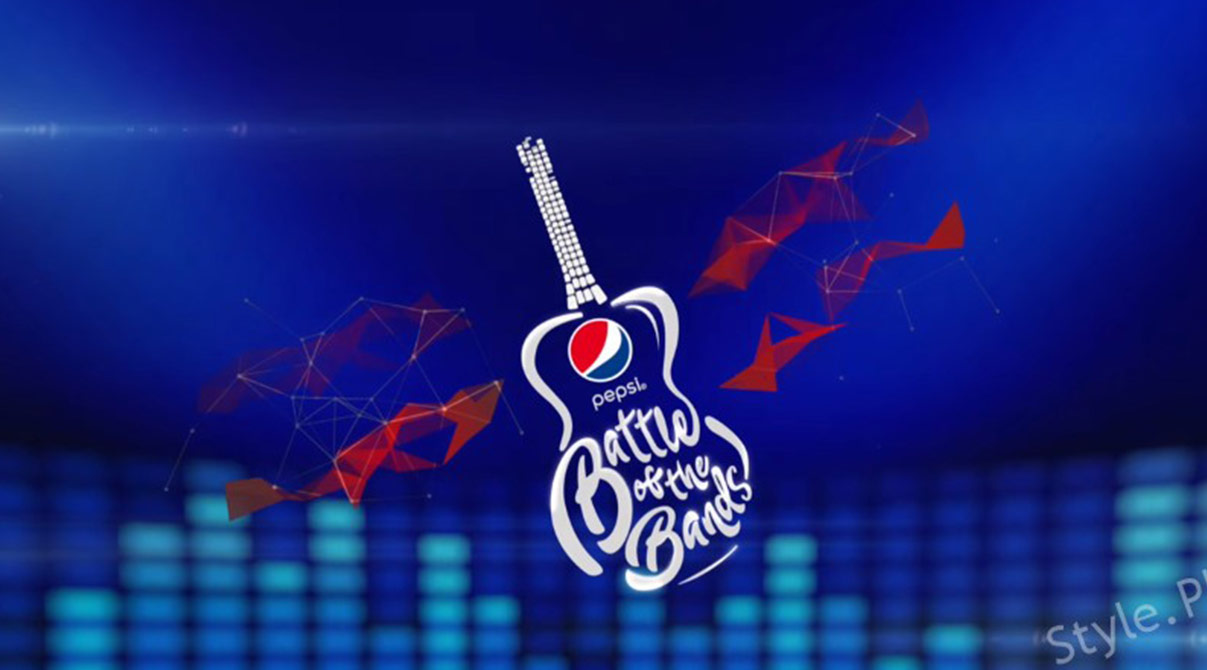 Initially aired on PTV Home in 2002, Pepsi Battle of the Bands was produced by Nofil Naqvi and directed by Ahsan Rahim and Amena Khan. The first-ever winners were Aaroh, who played against Entity Paradigm. 170 applications were sent to the reality TV show, out of which 70 were registered. The top 20 out of 70 were selected on grounds of strong vocals and musicals. They were then narrowed down to the top 10. The show followed the same format and went through minor changes over the course of time. It was canceled and then revived in 2017. 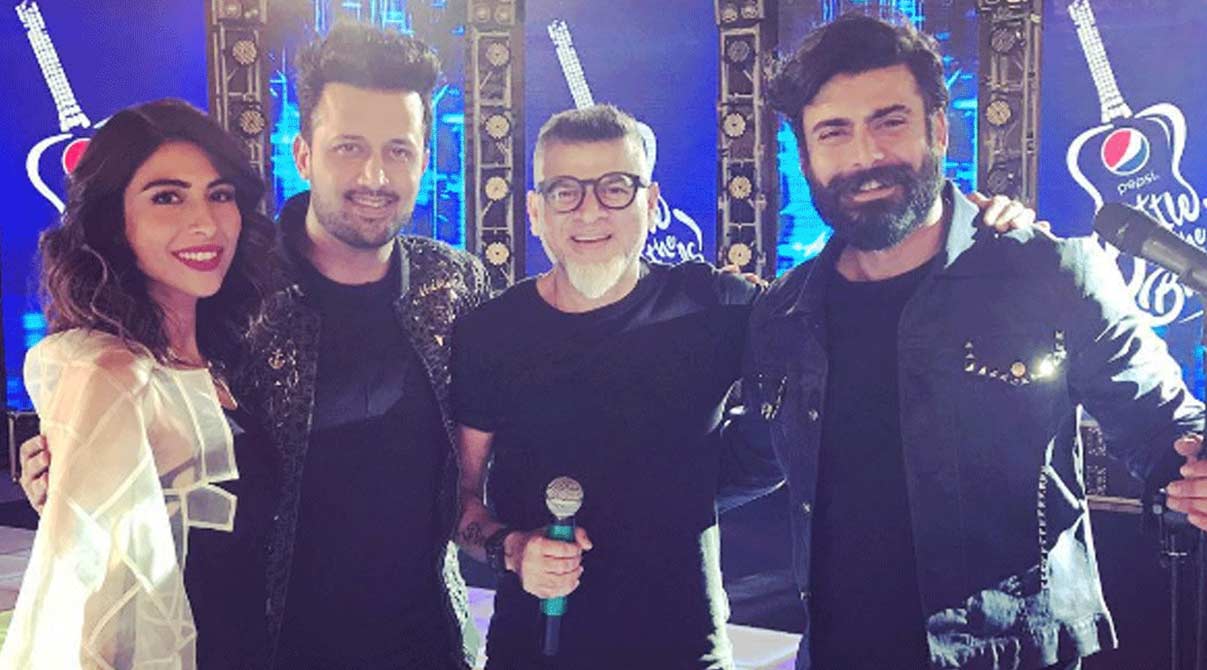 The judges on Pepsi Battle of the Bands change. However, Fawad Khan, Meesha Shafi, Farooq Ahmed, and Atif Aslam are some of the renowned names who have appeared repetitively.

Born in 1981, Fawad Afzal Khan is probably the most prolific judge on the panel. He is an actor, model, producer, screenwriter, and Singer. He received several awards over the course of his career, including a Filmfare Award, six Hum Awards, and three Lux Style Awards. Fawad Khan began his career by singing for his alternative rock band Entity Paradigm, which was one of the finalists in the 2002 Pepsi Battle of the Bands. He rose to prominence with his first album called Irtiqa. Fawad left a career in music after 250 performances to pursue a career in the film and drama industry.

Meesha Shafi is a prominent singer, actress, and model. She is known for her powerful vocals and unforgettable on-stage presence. Meesha Shafi made her debut in 2011 with her husband for the band Overload. She rose to prominence when she sang along with Arif Lohar in Coke Studio’s season 3. It was the most viewed number of Coke Studio until it was overtaken by Atif Asklam’s Tajdar e haram. She is responsible for scores of hit OSTs and singles, such as Dasht e Tanhai, Ishq Aap Bhe Awalla, Sun Ve Balori, and Mehram Dilan de Maahi. She has recently released her funky number Hot Mango Chutney Sauce which received international praise.

Farooq Ahmed was the lead vocalist of the band Aarph, which dissolved in 2009. He is famous for his strong voice and exuberant live performances. Farooq Ahmed sang Mein Nahi Manta in the year 2017 when the band reunited for Patari, a music app. He appears as a guest judge on the show.

Born in 1983, Muhammad Atif Aslam has appeared as a guest judge on the show several times. He is a playback singer, composer, songwriter, and actor. Atif Aslam is widely known for his hit singles and movie songs both in India and Pakistan. He has been giving chart-topping music to his fans consistently. Also, he is known for his vocal belting technique. Atif Aslam has sung in Urdu, Hindi, Punjabi, Bengali, and Pashto. He is also a recipient of Tamgha-e-Imtiaz from the Pakistani government.

The Contestants Who Made a Name 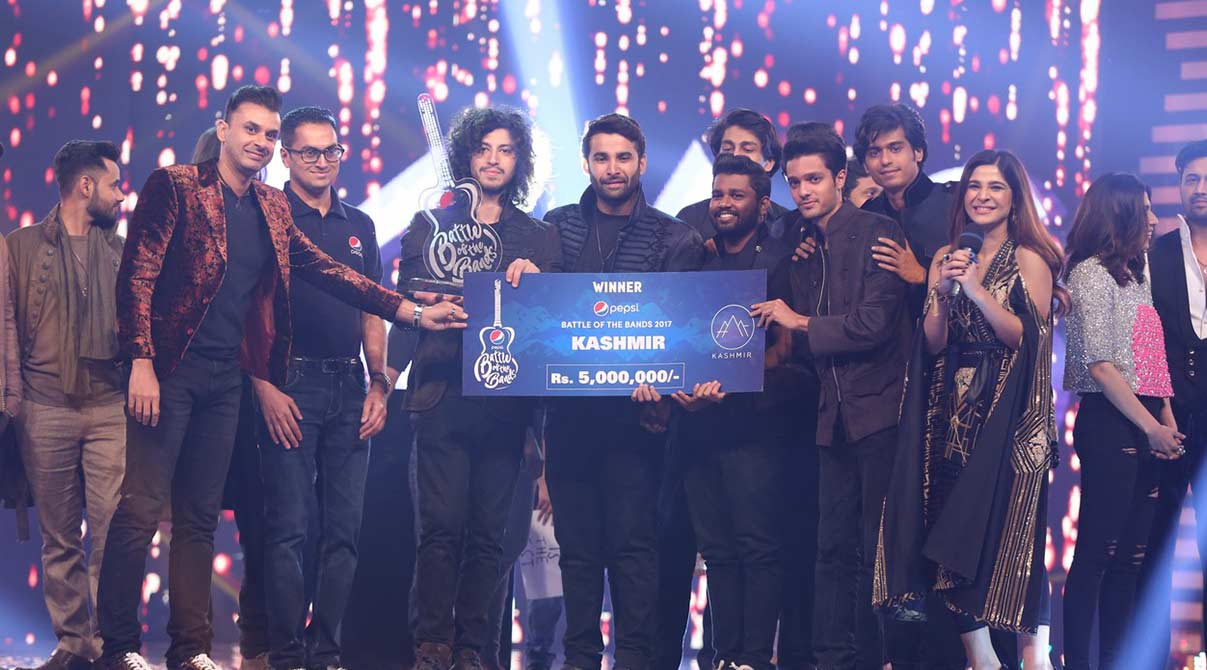 Pepsi Battle of the Bands produced many notable names throughout its course. The list includes Mizmaar, Yaar, Mekaal Hasan Band, Entity Paradigm, Auj, Bayan, and Aaroh. Here are a few that made it big in the music industry of Pakistan.

Aaroh is an alternative rock band. It is a musical terminology that means “the ascending scale in eastern classical music”. It was formed in 1988 in Karachi. Aaroh was founded by the lead guitarist Nabeel Nihal and the keyboardist Kamran Khan. It was later joined by vocalist Farppq Ahmed, drummer Adnan Hussain, and bassist Khalid Khan. Aarp achieved fame due to their thought-provoking lyrics, powerful performances, and the fact that they won the first season of Pepsi Battle of the Bands.

The band dissolved in 2009 and was resurrected in 2017 for a single music app. Since then, the band has been dormant.

Bayaan are the winners of season 3 of the Pepsi Battle of the bands. They are a progressive/alternative rock band. The band is made up of 5 members including the vocalist Asfar Hussain, the bassist Haider Abbas, and two guitarists namely Muqeet Shahzad and Shahrukh Aslam, and Mansoor Lashari the drummer. Bayaan has also performed in the Nescafe basement. They have played their music all over Pakistan in concerts and exhibitions. They beat the band Xarb to grab the title of winners in season 3.

The band started out in 2008 under the name of Shabhi. It was then called Crackdown in the underground music scene of Karachi. When the band participated in Pepsi Battle of the Bands, it was called Auj. The first song that they sang was Lafz. The founding members included Syed Hasnain Ali and Muhammad Kashif. They were later joined by Kashif. They describe their music as “deep, emotional, aggressive, sweet and with attitude.” Auj won Pepsi Battle of the Bands Season 4 in 2019 by beating the band Aarish. The lead vocalist for Auj famously said, “Your own songs should give you goosebumps. If they don’t, you have got work to do.”

Also known as EP, this band was formed in Lahore in 2000. It was founded by the songwriter and guitarist Zulfiqar J. Khan, keyboardist and vocalist Ahmed Ali Butt, and the heartthrob Fawad Khan. They were later joined by the guitarist Salman Alberts, Ali Asad, and Waqar Ahmed on the drums. Also, their music has been classified as progressive metal, progressive rock, and psychedelic rock. Even though they couldn’t win Pepsi battle of the bands season in 2002, they came out as the force to be reckoned with. Their Album Irtiqa was received well by the fans and critics alike.

Has It Been Able to Revive Music?

Pepsi Battle of the Bands has surely been able to revive the music scene of Pakistan. Also, it has given a number of hit bands and successful music artists. What is your favorite band from the 4 seasons of the show? Let us know in the comment section below.

Qureos Raises $3M for Its ‘Learn To Earn’ Platform

Samsung is Aiming for Local Assemblage of the Phones in Pakistan