Babar Azam, the rising Pakistani cricket star, sent out a tweet in support of Virat Kohli after the Indian batsman was trolled on social media. The tweet has taken the internet by storm, with people lauding Babar for his show of support. 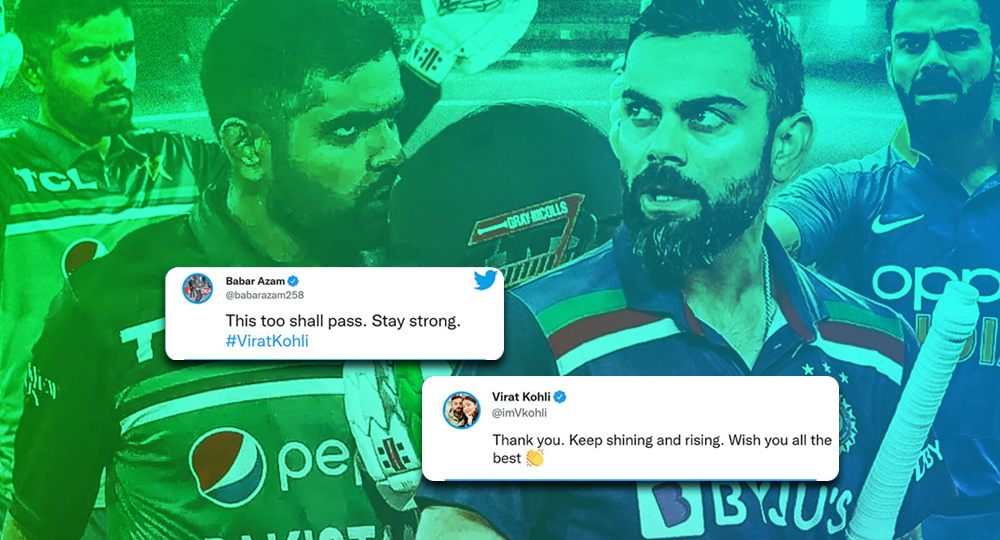 India’s cricket captain Virat Kohli is one of the most successful batsmen in the world. He is also one of the most popular athletes in India. Kohli has led India to victory in many international cricket tournaments, including the World Cup.

Virat Kohli, who missed the first ODI of the ongoing series against England after a groin injury, returned in the second ODI but could only score 16 runs as his side lost the match by 100 runs. Kohli has succeeded at a staggering 77 consecutive international innings without having achieved a triple-figure score. He received a lot of criticism because of this. India’s T20 World Cup has also become a topic of conversation, particularly for players and former players.

Pakistani skipper Babar Azam has backed up Indian cricketer Virat Kohli, who’s currently in the midst of fighting allegations. Babar tweeted with a photo of himself and Kohli on social media on Thursday.

Babar Azam later explained that this tweet was to let people know about Virat Kohli’s outstanding achievements. He further stated,

“As a player myself, I know you can go through such a phase (out of form) and I also know what a player goes through in such a phase. In those times, you need support. I just tweeted thinking that it will give just some support. He is one of the best players.”

“He is playing a lot of cricket and he knows how to come out of these situations. It takes time, if you back players, it will be really good.”

The former Indian captain received confirmation of support from his captain Rohit Sharma as well,

“As I have said previously, form can go up and down, it’s part and parcel for every cricketer’s career. Even the greatest of the cricketer would have his share of ups and downs.”

“For someone who has won so many matches for India, you need one or two innings to bounce back. That’s what I feel and I am sure all those who follow cricket will think similarly.”

Related: Hail to the King: Here is Why Babar Azam is Truly the GOAT?

The Indian cricketer later replied to Babar’s tweet and wrote,

Thank you. Keep shining and rising. Wish you all the best 👏