When someone asks you to name the different provinces of Pakistan, you know them all but rarely would you have explored each one of them in detail, particularly Balochistan. It is true that we are aware of the provincial capital and some adjoining areas renowned for their history. However, Balochistan is blessed with unexplored beauty due to which the government has decided to start the first-ever tourist train in Balochistan on July 3. This indeed is a great initiative by Pakistan Railways on behalf of the Pakistani government and would certainly attract local as well as international traveling enthusiasts to witness the hidden beauty of the province.

Let us dive deeper to understand the reasons behind this government’s decision of exploring the hidden treasures via tourist train Balochistan. 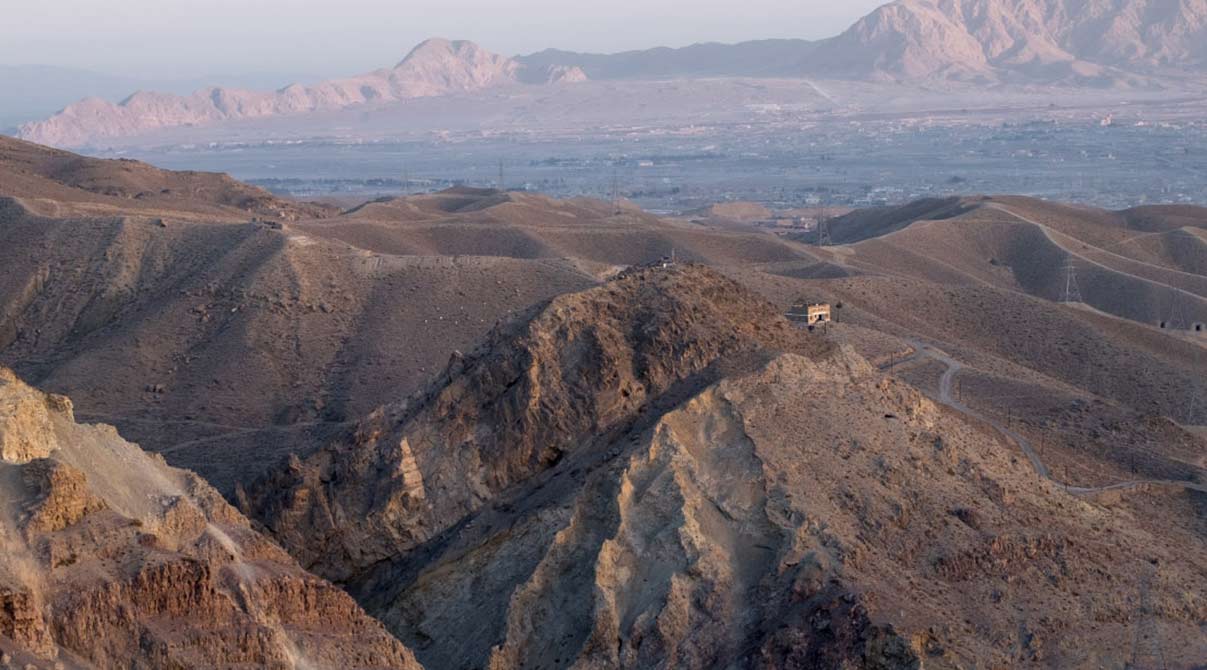 Many of you will not be aware of the hidden marvels of Balochistan because we barely hear any news and updates related to the province except the weather updates. Most of the information available on electronic resources is somehow related to the sessions and decisions taken in the provincial assembly. One surprisingly unprecedented news for you would be the historical significance of this piece of land. Here, history goes back to the Oligocene period. No need to get frightened from the term as the next one should catch your attention. Balochistan is the land with the most archaic signs of life found on the planet.

You probably heard of the dinosaurs which got extinct with the collision of large celestial bodies on Earth, the living organisms have evolved with time to become amphibians, reptiles, birds, and mammals. Among these, paleontologists have discovered the fossils of one of the largest mammals resembling the present day rhinoceros. This extinct mammal was named Baluchitherium based on its location and area of discovery. 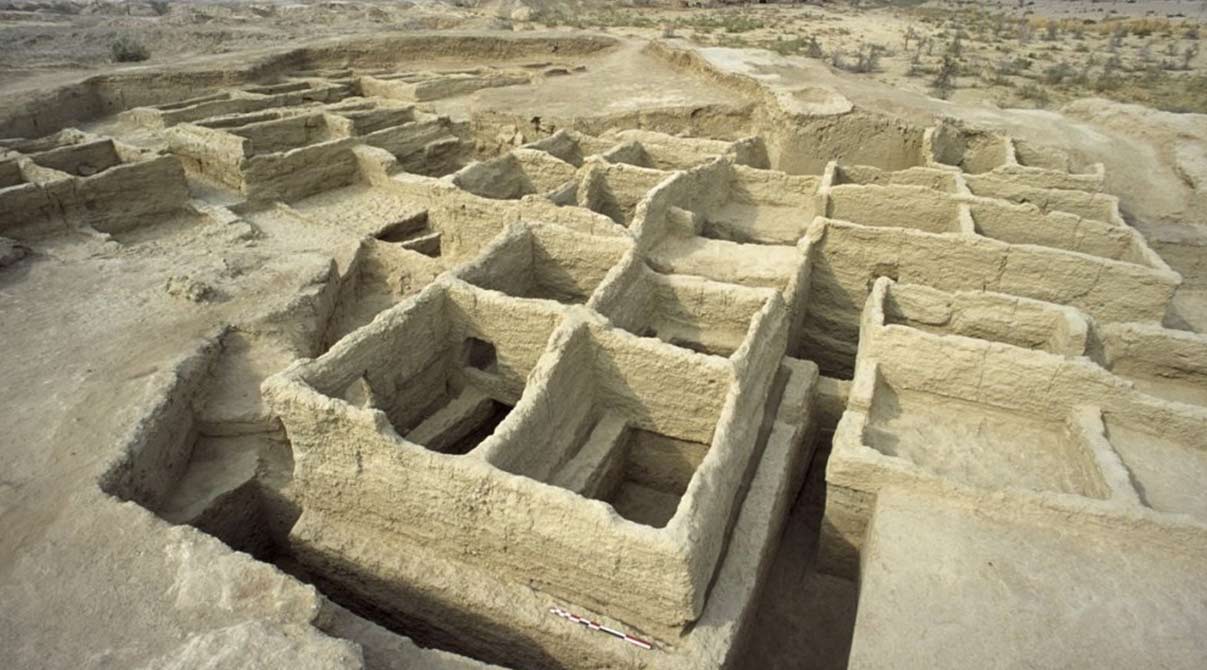 If you thought this is the only historical significance of the place, Mehergarh would certainly catch your attention, the area near Bolan. One of the earliest documented civilizations is assumed to have lived at Mehergarh based on the relics discovered from adjacent localities of Mehergarh. This discovery made all the historians reconsider their perspectives regarding the land that we now know as Pakistan. Before the discovery of these relics, Indus Valley Civilization was taken as the oldest community to have lived in this region. However, the findings at Mehergarh have simply unravelled a new chapter in the history of the world. 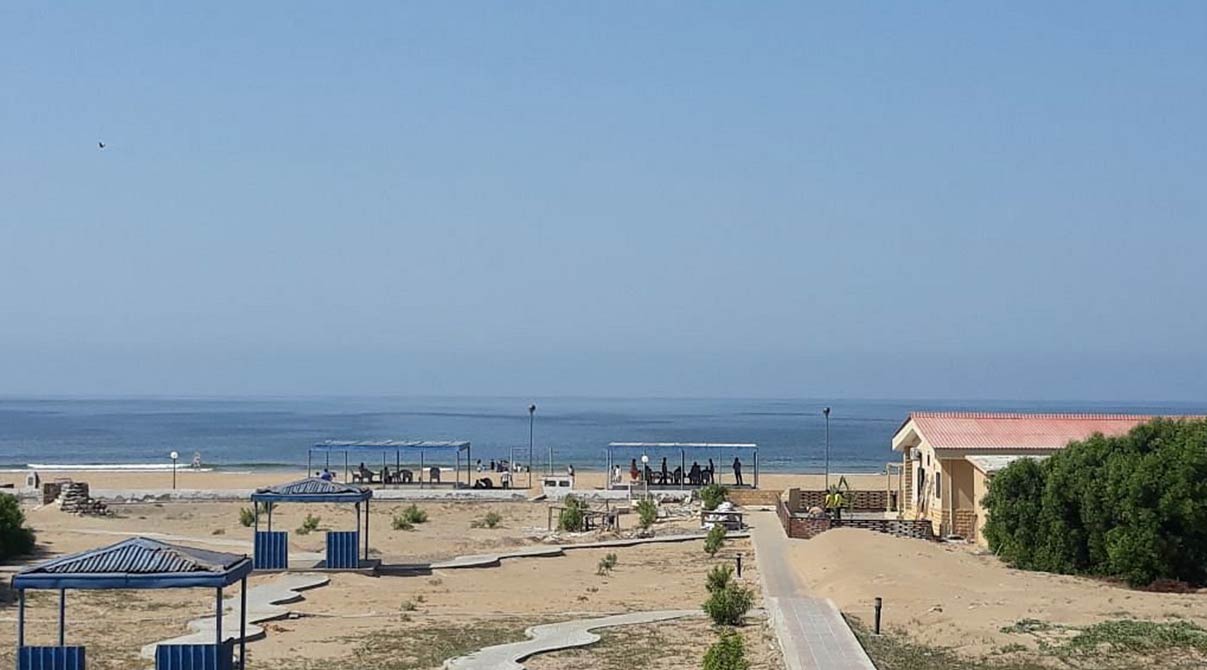 If you like to travel and explore new places, Balochistan offers some beautiful sceneries to make some astonishing memories with friends and loved ones. The province is renowned for its renowned geography. The mind-blowing coastline is full of surprises offering a super highway running between Jiwani near the Iranian border and Gadani in Karachi. The area between these two resorts has multiple beaches extending over six hundred kilometers. Gadani offers a myriad of picnic spots to have the best time of your life. Sonmiani is a wonder of its kind, a white sand beach with the best bird observing facilities. Special measures have been taken to safeguard the dolphins visiting these coastal areas. 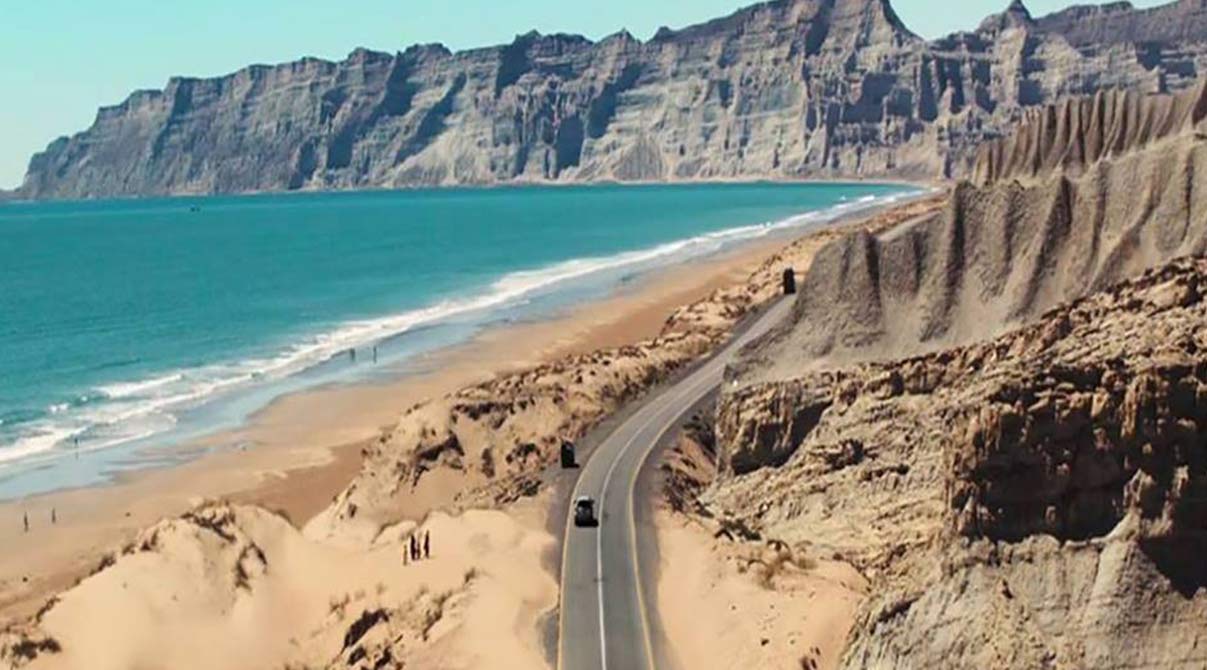 If you love scuba diving and are crazy about the world hidden beneath the oceans, then Churna island will become your favourite spot. The place is considered to be the favourite place for all the families living in Karachi and searching for a place to spend some quality time away from the city’s waste and industrial pollution. Your very first adventure of scuba diving would make you interact with the enriched diversity of marine life. Moving ahead, Kund Malir is the preferred place offering a good number of rest houses alongside the deep blue waters. In other words, you can come to spend weekends with your family if you are a seaside enthusiast. If you move parallel to the coastal highway, you can find various picnic spots near Hub Dam. As you enter the region, you will come across various indigenous carved tombs and graves. 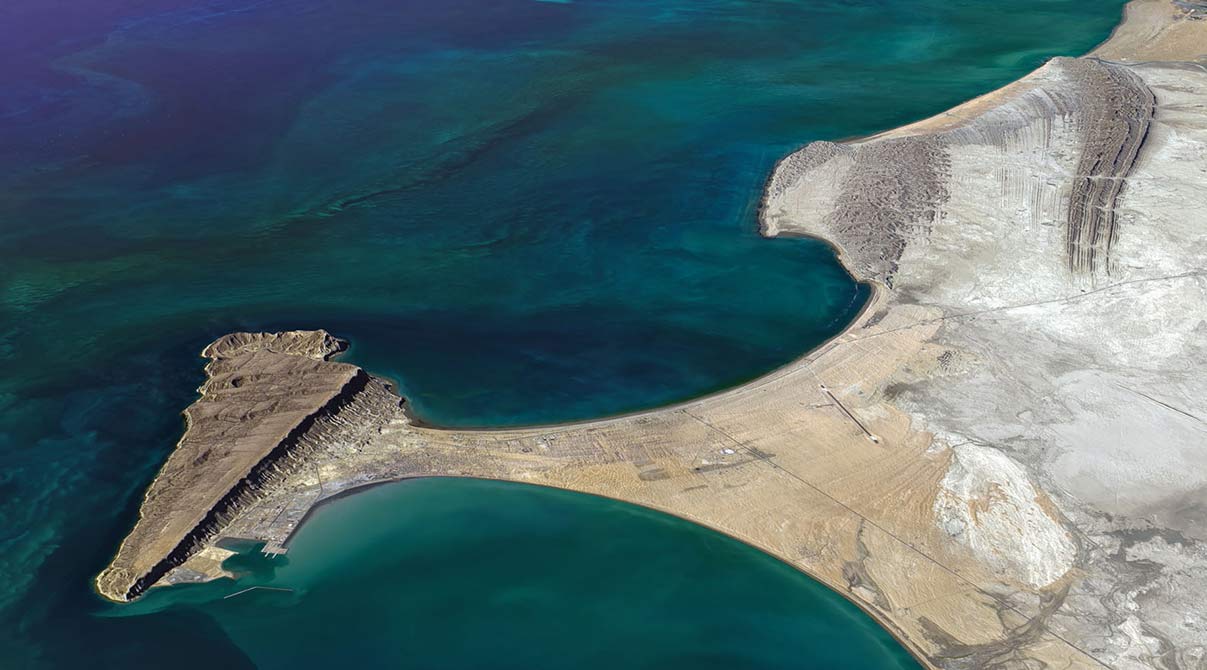 You have witnessed cinematography in different movies: the sea is shot from the edge of the cliff. Such scenes create a desire in an individual to witness the beauty with their own eyes being part of the scenario. That is all possible in Balochistan from the top of the Hammerhead cliff.  The place offers some remarkable views of the Arabian Sea. If you are wondering where to find it,  just visit Ormara where you will find a beautiful beach and a naval base right next to the Hammerhead cliff. 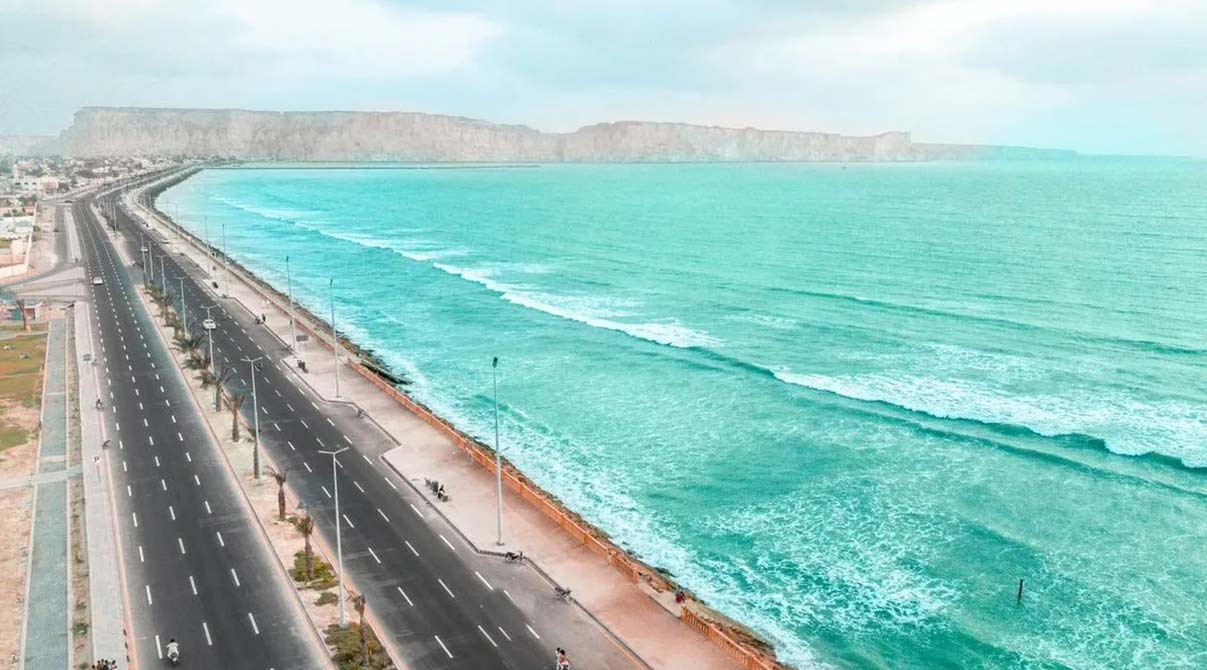 In case some of you are in a mood for fishing, you can’t miss the small fishing town of Pasni. The place is also famous for setting the stage for the renowned marine protected area popularly known as Astola island and locally called Haft Talar. The site offers some great opportunities for skydiving, snorkeling, scuba diving and fishing. Furthermore, you will also find mandir and shrines in the local vicinity. You have a choice to either travel by a fishing boat to enjoy the pristine beauty of the place filled with peace and serenity or you can make it quick with a speedboat to cover maximum area in a short span of time. You can enjoy some wonderful views of hills in the surroundings.

The birds visiting the island migrating from far flung areas enhances the majestic beauty of this place even further. The water surrounding the island has diverse marine life. You can get plentiful chances to capture whales, sharks, dolphins. You can also find turtles visiting the shores for nesting and laying their eggs. 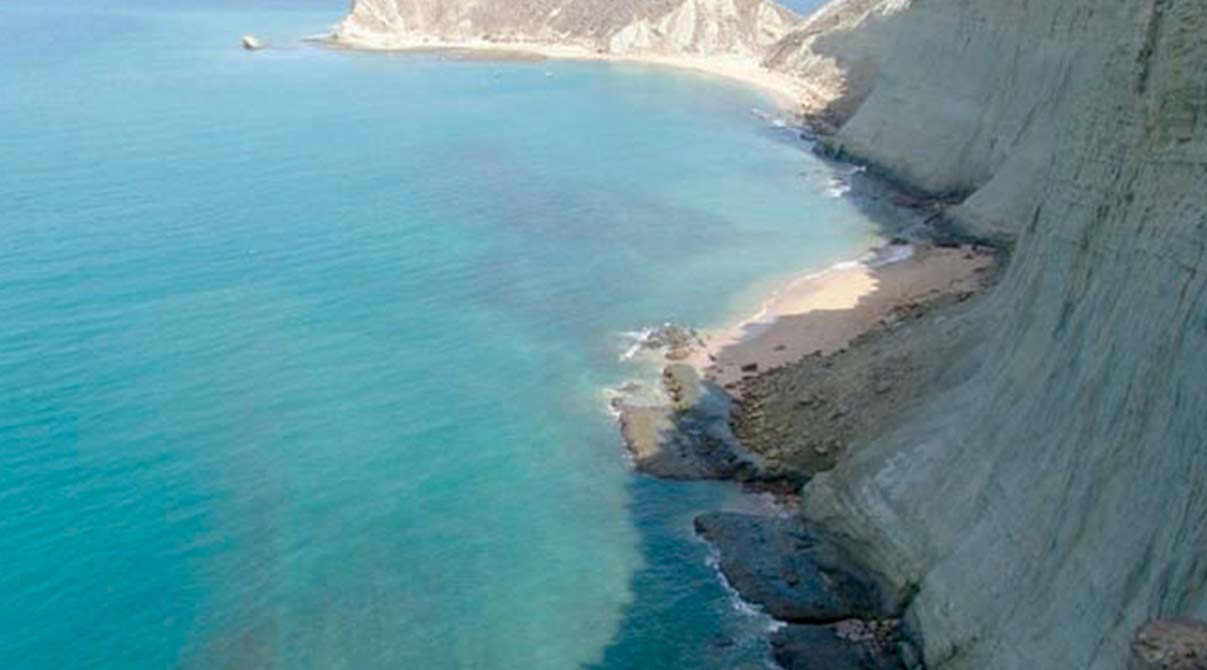 Next, Balochistan offers the best deep sea port of Pakistan. You got it right. We are referring to Gwadar Sea Port being developed under the China Pakistan Economic Corridor as an offshoot of the Belt and Road Initiative connecting China with Europe and other international markets only accessible through warm waters. In addition to the pristine beauty of Jiwani where people generally enjoy watching the sunset from the beach, the beauty of the place has been upgraded to the next level with the ongoing development under CPEC.

If you are more interested in nature, then a short visit to Victoria’s Hut is a must which was built by the British administration when the place was once their colony. Right next to it but somewhat hidden is a nesting site for turtles commonly known as Daran Beach. This site is adjacent to the border Pakistan shares with Iran. It offers some best sceneries visible via tourist train Balochistan. You can only imagine capturing this in other parts of the world.

Related: PM Says “Future Belongs to Gwadar” Here is Why? 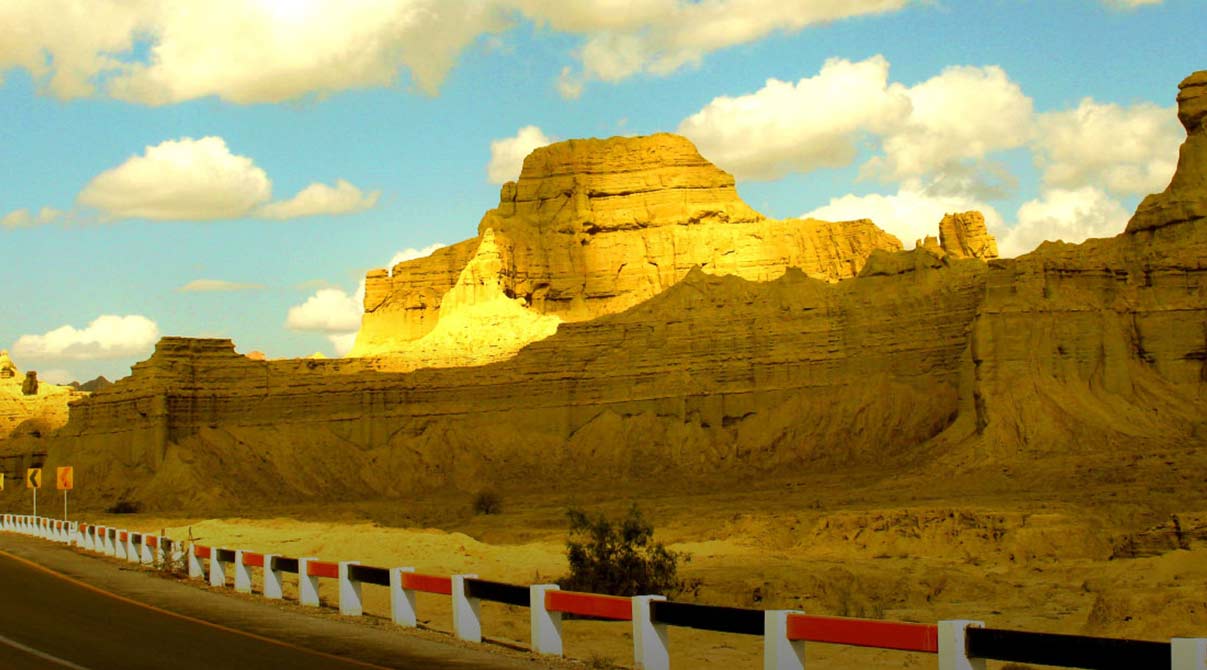 If you thought that Balochistan is nothing more than barren land alongside rocky mountain ranges, the province is rich with biodiversity. These mountain ranges take you deep into the woods to behold Hingol, the largest national park of Pakistan right next to the Hingol river. The place is taken as crocodiles’ sanctuary. Furthermore, you can find plenty of chinkara deer, urial and ibex jumping and running across the vast fields. An ideal time to visit the place is April. You shall witness a large number of Hindu pilgrims visiting their holy sites particularly Nani Mandir also known as Hinglaj Mata Mandir. The place is considered sacred by all the Hindus coming to attend their cultural festivals. 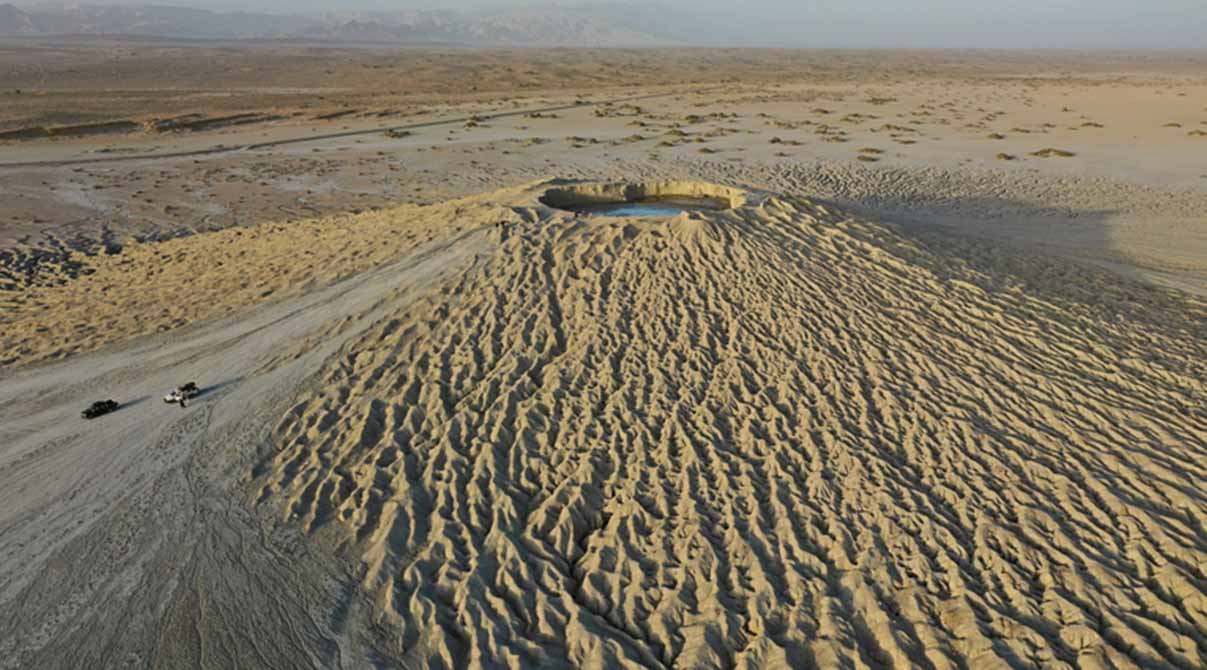 One little surprise for all the adventure lovers is a famous mud volcano called Chandergupt. That is not the only volcano as you find an array of volcanoes right next to this large one. You can find streaks of mud running down through its sides. If you are brave and willing to take a risk, you can climb up to witness the grey liquidy mud bubbling in the craters.

The state owned railway company which was founded in 1861 with its headquarters in Lahore already had its network extending between Torkham and Karachi. Its recent extension to open a gateway of exploring the beauty of Balochistan would certainly attract tourists from different parts of the world. In return, we can anticipate an influx of revenue supporting the economy of the country by reducing the fiscal deficit and strengthening our industrial as well as agro based economy.

The tourist train Balochistan is expected to run between Kolpur and Bostan railway station. The best part is that the cost of a single ticket is only 50 rupees. Get ready to explore all the above sites.